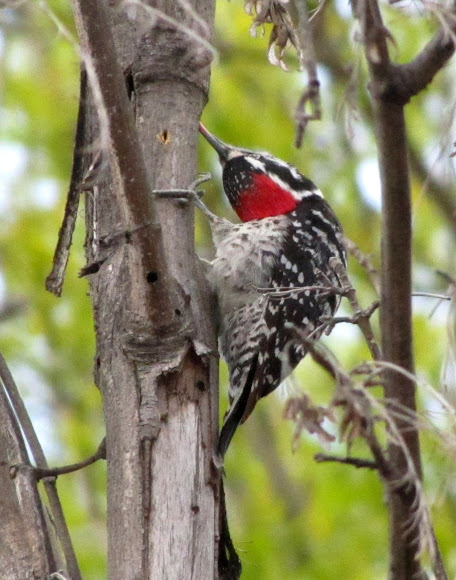 According to Wikipedia Nuttall’s are a non-migratory species with a geographic range confined to northern California extending south towards the northwest region of Baja California, Mexico. Their preferred habitat is arid to mesic woodlands. In particular, these woodpeckers prefer oak woodlands, although they also occur in riparian sites and chaparral in the most southern parts of its range because of the decrease in oak abundance. Individuals are found from sea level to 1250 m, rarely to 2000 m. The birds are not considered globally threatened although the range is restricted to the California endemic bird area. They are fairly common in California with a total world population estimated at over 100 000 individuals (density of about 20 birds per square kilometer in San Bernardino County).

Thanks Venus, I fully agree with you. Noah has introduced me to, and taught me about some of the most amazing flora and fauna on the planet !

awesome! yet another specie i've never heard of ;) thank you reza and PN~

Thanks for the pictures of the Nuttall's woodpecker. Have never seen one. Fascinated by woodpeckers. Good pictures.

Yes Hema it the red patch is under its chin, Jellis is correct about the the angle !

Yes. If you were driving a car and turned to look behind you, that's what it is doing.

Head is upside down

The 1st pic is abit confusing. Is the red patch under it's chin?

That's all right Tomato, I look forward to many of your spottings in the near future.....if you have any other question please feel free to let me or any of the other rangers know in chat :) Once again welcome to project Noah :) and a link to our FAQ's http://www.projectnoah.org/faq

Is that woodpecker related to the sap sucker flicker?

Thank You Shawn, Shirezu and Jellis !

From what I can see, it looks like a Nuttall's Woodpecker.