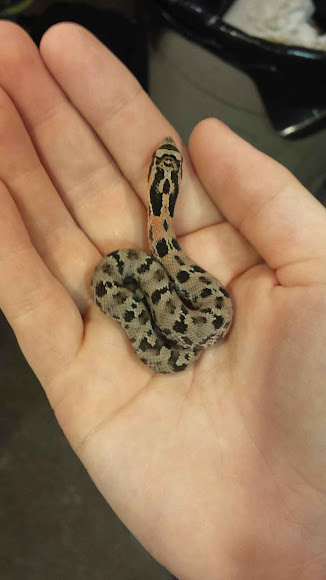 These adorable little guys have a gray body with black blotches and orange/red around the neck. The second photo shows the first baby coming out of the egg, and the last photo shows a pile of around 14 of them.

Mom was caught in a residential neighborhood, the babies released nearby in a protected area with oak forest and lots of little toadlets.

Part of my job is relocating snakes when they are found in peoples' yards/houses (versus the people killing them). A hognose was found in someones house, and she was shedding so I was going to hold onto her until she could see a bit better before I let her go. Well right after she shed, she laid a bunch of eggs! I released mom, and held onto the eggs, and they hatched in early August. I have never seen so much cute in my life! There were 14 babies, and I held onto them for a couple days, gave them some water, then went and released them in an area close to where they were caught at, but hopefully they will stay away from people! The area is state land and they are protected on it.

Ashley, I would like to offer some incite on doctors with snake bite training. It's not that common. I worked in a trauma center emergency room for 20 years and out of the dozens of doctors working there, I can only think of two that had any type of special training on snakes, and only one of the two was any good. It would be nice if that number was higher, but at least in my area, its not.

Thanks! I got to see several of them hatching, that was just the first one and I was so excited so snapped a photo with my phone. I have camera photos too, need to find them and add them

such an amazing picture that you actually got that snake in the middle of hatching!

Ohhhhh man, that is so stupid. I don't know where people get these things from! We've done a pretty good job here in the US of informing people that they don't need to catch the snake to show doctors what kind it is, that usually just gets you bit even more! Almost all of the snakes in the US use the same anti-venin, so it doesn't really matter what you are bit by. But even if you are bit by one of the other species that requires a different anti-venin, the symptoms shown are much different so any doctor with snake bite background, and they should know how to treat accordingly. I would imagine it is different in India though, y'all have many more species there that can kill people easier! Education really is key, hopefully that becomes more popular over there in India!

I read in the papers that a snakebite victim was told to catch and bite the snake...so that poison would "cut" the poison. On TV they said the guy caught the snake to show the doctors what species had bit him but the newspaper reported he kept biting the snake and ultimately died. We need awareness...education and lots more anti-venin ...India at least. Thanks Ashley.

Thanks Sukanya! I teach people about snakes everyday, and I change quite a few minds and get people to appreciate them to where they won't kill them. I'm glad this is catching on in India too! There are so many reasons why snakes are important, it really is a shame so many people still kill them out of fear and ignorance :/

Great shots. greater story. It is fabulous what you do. The idea of relocating snakes as opposed to killing them is slowly catching on in India too...social awareness and knowing who to call are the keys. Thanks for sharing.