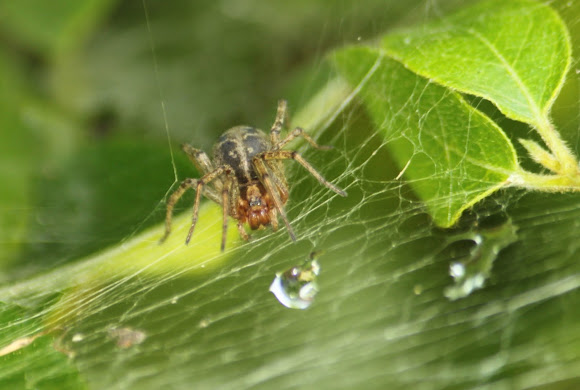 Agelena labyrinthica is a species of spider in the family Agelenidae. It is a widespread species in Europe. Agelena labyrinthica has a body length of up to 18 mm (0.71 in). The abdomen is dark with a pale central band flanked by white chevron marks. The cephalothorax is yellow-brown and bears two, broad longitudinal stripes positioned towards the front of the spider.

A. labyrinthica build flat plate surface webs connected to funnel-shaped retreats similar to labyrinths, which are typically constructed between low lying grass and vegetation. These webs can be at ground level, or up to 1.5 metres (4 ft 11 in) from the ground, however, the majority are found approximately 60 centimeters (24 in) off of the ground. These spiders are fairly common in Europe and Central Europe, and are typically concentrated in areas near forests and low lying vegetation, as well as in dry grasslands.