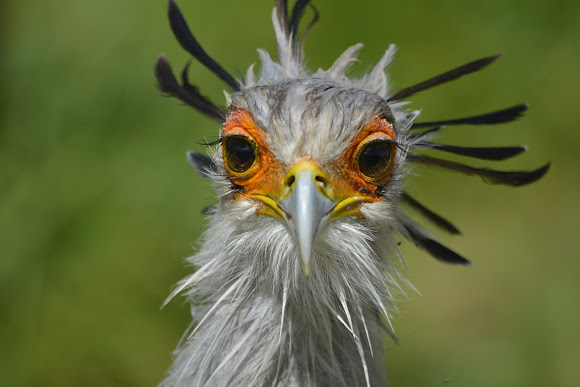 Saw this beautiful Secretary Bird at Hluhluwe–iMfolozi Park during a Safari tour in between scuba diving in South Africa and Mozambique. The Secretarybird is easily distinguished from other raptors and cranes by its grey plumage, the orange facial skin with raptor-like beak and the characteristic stealthy stride it takes as it moves through the grass in search of prey. The shape of the body is very similar to that of an eagle but walks on the legs of a stork or crane. The sexes are alike with the males having a slightly longer crest and tail than the female. A full grown Secretarybird can reach a mass of 4kg (max 4.5) and a reach an astonishing 1.4 meters tall with a wingspan of 191-220cm. In flight one would think that this bird could be confused with the similar coloured Grey Crowned Crane, but it can easily be distinguished due to its barred tail feathers. With a tail of around 75cm long the Secretarybird is the record holder for the longest tail in Africa. The juveniles of this species have a browner plumage, yellow face and a shorter tail than the adults of the species.

The Secretary Bird (Sagittarius serpentarius) is a very large, mostly terrestrial bird of prey. Endemic to Africa, it is usually found in the open grasslands and savannah of the sub-Saharan region

Thanks, @venusflytrap2000 for your kind words and all your support! :)

Thanks again, @Antonio for all your kind words and support! :)

Thanks, @Jim Nelson and congrats to you too!

Thanks, @LarryGraziano, glad you enjoyed this one :)

This is truly a wonderful spotting and animal Albert! Thank you so much for all you share with us. Congratulations for this auspicious achievement!

Thanks, @Ashley and PN Rangers for selecting this picture.

Hahaha love this one... such character! I was always happy when I saw one in Africa. Lovely composition and photograph. Congratulations Albert.

Congrats Albert, your amazing Secretary Bird placed 3rd in the birds category for the Best of 2015! Here is the link for the '2016 Best Wildlife Photo mission so you can add more fantastic spottings for this year! www.projectnoah.org/missions/2004046002

Thanks, @Ashley for this honour! :)

Congrats Albert, your beautiful Secretary Bird has made the top 10 bird spottings in the '2015 Best Wildlife Photo' mission! Rangers are voting on the top 10 bird spottings, and the top 3 will be announced on February 1st. The top 3 spottings will be commented on here on the site, but make sure you keep a look out on our Facebook app page for the announcement as well! Congratulations on making the top 10! https://www.facebook.com/projectnoah

Thanks, @Daniel, glad you enjoyed the photo :)

love the photo. congrats on the SOTD

Congrats Albert for the SOTD!

Thanks, @Ava and yes, I was aware the post was shared at Frans de Waal :)