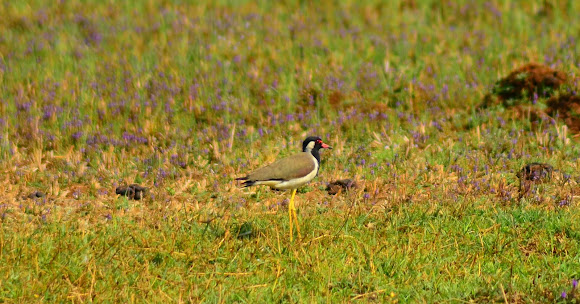 I spotted this lapwing near Argan Talab in Belgaum

This species is declining in its western range, but is abundant in much of South Asia, being seen at almost any wetland habitat in its range.

Red-wattled Lapwings are large waders, about 35 cm long. The wings and back are light brown with a purple sheen, but head and chest and front part of neck are black. Prominently white patch runs between these two colours, from belly and tail, flanking the neck to the sides of crown. Short tail is tipped black. A red fleshy wattle in front of each eye, black-tipped red bill, and the long legs are yellow. In flight, prominent white wing bars formed by the white on the secondary coverts.