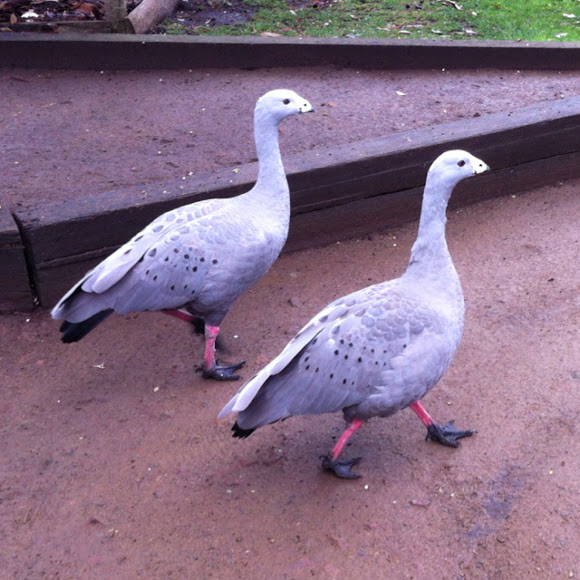 Identification: The Cape Barren Goose is a very large, pale grey goose with a relatively small head. Its stubby triangular bill is almost concealed by a very prominent greenish-yellow cere (skin above the bill). It has rows of large dark spots in lines across the scapulars (shoulders) and wing coverts. The legs are pink to deep red and the feet black. In flight it shows dark wingtips and along the trailing edge of the wings. Size Range: 75 cm to 100 cm

Seasonality: During the summer, the non-breeding geese generally leave the islands for the mainland where they feed on improved pasture. Feeding and Diet: The Cape Barren Goose is a grazing bird, eating predominantly the common island tussock grass, Poa poiformis, as well as spear grass and various herbs and succulents. They also eat pasture grasses, including barley and clover, and legumes. Communication: On the ground usually quiet unless alarmed or in display. In flight more vocal, male has higher pitched, harsh trumpeted 'ark, ark-ark'. Mating and Reproduction: The Cape Barren Goose lays eggs in a nest in the tussocks of open grasslands. The nest is built by the male and lined with down. Each pair establishes a territory in autumn, prepares a nest and defends it noisily and determindly against other geese. This species is monogamous, and pair-bonds are life-long. The female incubates the eggs, and the young are brooded by both parents equally. Breeding Season: July to September. Clutch Size: Four to six. Incubation: 35 days Conservation Status By the 1950s, numbers of the Cape Barren Goose were so low that biologists feared they may be close to extinction. Various initiatives have been taken which have increased the goose population to a level where they are no longer considered to be in danger. However they remain one of the world's rarest geese. These birds were sighted at the Bonorong Wildlife Sanctuary in Tasmania. Information came from: http://australianmuseum.net.au/Cape-Barr...

Thank you Argy Bee :-) these two were having a go at another on the other side of the gate, they really meant business!