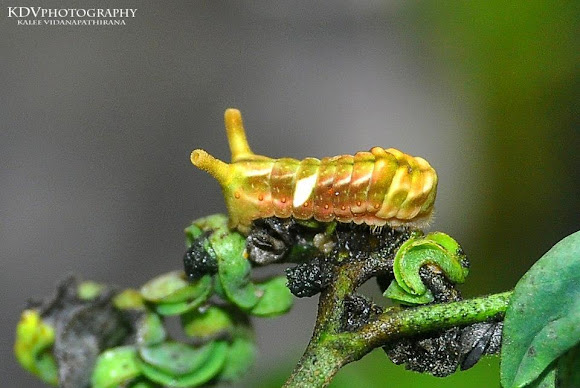 Indian Sunbeam is an uncommon butterfly with rather unusual male-female distribution pattern in Sri Lanka. W. Ormistom wrote in last century that “the male is very plentiful in Wellawaya, and is almost always found settled on wet roads and in river-beds. The female is scarce there. At Anuradhapura I have found the male scarce, but the female common.” (Ormiston W., 1924). Base on museum specimens de’Abrera also confirmed this by stating “male is more visible south of the central mountain range, whilst the female is more visible in the northern low country dry zone.” (de’Abrera B., 1998) Female in above picture was photographed at Anavilundawa sanctuary of North-Western province and male which is not shown here has dissimilar bright copper red recto. Its larva feeds on various plants of Family Fabaceae such as Gal-Karanda(Pongamia pinnata), Olinda(Abrus precatorius), Bokala wel (Derris scandens) and also Heynea trijuga of family Meliaceae (Gamage R., 2007)

thank you JanBowman and Jason for your comments :)

thank you for your comments RiekoS and Leuba :)