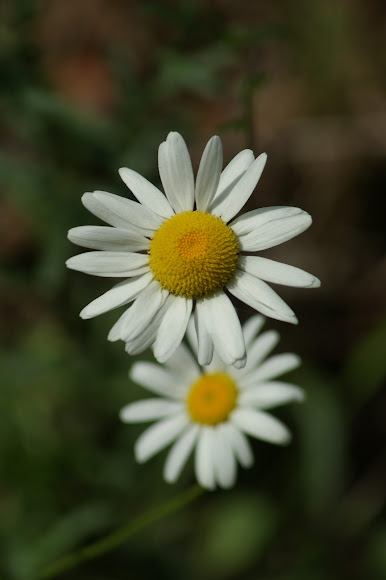 Oxeye Daisy is a widespread flowering plant native to Europe and the temperate regions of Asia. It is one of a number of Asteraceae family plants to be called a 'daisy,' and has the vernacular names common daisy, dog daisy, moon daisy, and ox-eye daisy. It is a perennial herb 2 feet (61 cm) high by 1 foot (0.30 m) wide. The stem is mostly unbranched and sprouts laterally from a creeping rhizomatous rootstock. The leaves are dark green on both sides. The basal and middle leaves are petiolate, obovate to spoon-shaped, and serrate to dentate. The upper leaves are shorter, sessile, and borne along the stem. Leucanthemum vulgare blooms from late spring to autumn. The small flower head, not larger than 5 centimetres (2.0 in), consists of about 20 white ray florets that surround a yellow disc, growing on the end of 1 to 3 ft (30 to 91 cm) tall stems. The plant produces an abundant number of flat seeds, without pappus, that remain viable in the soil for 2 to 3 years. It also spreads vegetatively by rhizomes.

This typical grassland perennial wildflower, growing in a variety of plant communities including meadows and fields, under scrub and open-canopy forests, and in disturbed areas. This one was photographed growing on the side of the road in McCormick County, SC.

The un-opened flower buds can be marinated and used in a similar way to capers. Leucanthemum vulgare became an introduced species via gardens into natural areas in parts of the United States, Australia, and New Zealand, where it is now a common weed. In some habitats it is an invasive species forming dense colonies displacing native plants and modifying existing communities, and is classified as a noxious weed. It is difficult to control or eradicate, since a new plant can regenerate from rhizome fragments and is a problem in pastures where beef and dairy cattle graze, as usually they will not eat it, thus enabling it to spread. Oxeye daisy is a host for several viral diseases affecting crops.