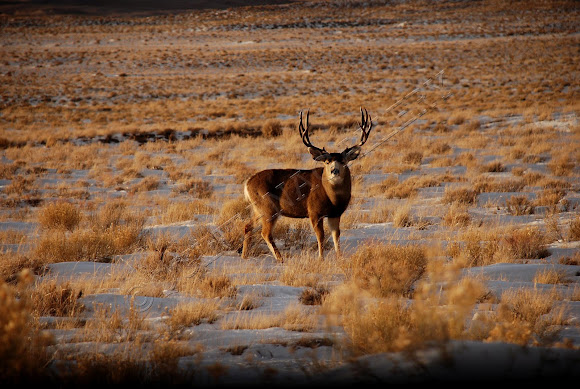 The mule deer is a deer indigenous to western North America; it is named for its ears, which are large like those of the mule. There are believed to be several subspecies, including the black-tailed deer. Unlike its cousin, the white-tailed deer, mule deer are generally more associated with the land west of the Missouri River, and more specifically with the Rocky Mountain region of North America. Mule deer have also been introduced to Argentina. The most noticeable differences between whitetails and mule deer are the size of their ears, the color of their tails, and the configuration of their antlers. In many cases, body size is also a key difference. The mule deer's tail is black-tipped, whereas the whitetail's is not. Mule deer antlers are bifurcated; in other words, they "fork" as they grow, rather than branching from a single main beam, as is the case with whitetails. Each spring, after mating season, a buck's antlers start to regrow almost immediately after the old antlers are shed. Shedding typically takes place in mid February, with variations occurring by locale. Although capable of running, mule deer are often seen Stotting (also called "Pronking"), with all four feet coming down together. Black-tailed deer have also been introduced to Kauai (Hawaii).

In addition to movements related to available shelter and food, the breeding cycle is important in understanding deer behavior. The "rut" or mating season usually begins in the fall as does go into estrus for a period of a few days and males become more aggressive, competing for mates. Does may mate with more than one buck and go back into estrus within a month if they do not settle. The gestation period is about 190–200 days, with fawns born in the spring, staying with their mothers during the summer and being weaned in the fall after about 60–75 days. Mule deer females usually give birth to two fawns, although if it is their first time having a fawn, they often only have one. A buck's antlers fall off during the winter, to grow again in preparation for the next season's rut. The annual cycle of antler growth is regulated by changes in the length of the day. There are several non-human predators of mule deer. Gray wolves and mountain lions are the main predator of adult deer. These two leading natural predators often herd out weak, sickly or young specimens to kill but will also take down the largest and healthiest mule deer with some regularity as well. Bobcats, coyotes, wolverines, American black bears and brown bears are capable of preying on adult deer but usually either only attack fawns or infirm specimens or eat the deer after it has died naturally.