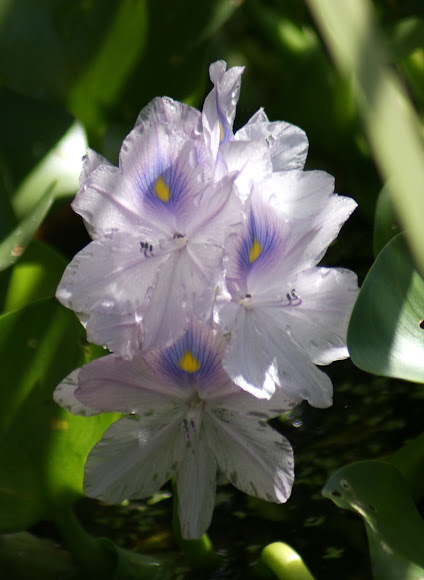 Eichhornia crassipes is a floating, invasive non-native plant commonly encountered as dense mats in freshwater habitats. Several features make E. crassipes easy to recognize, including rosettes of rounded and leathery, waxy, glossy green leaves attached to thick, spongy (often bulbous or inflated for floatation) petioles (stalks), dark feathery roots that typically hang suspended in the water below the floating plant, and attractive lavender flowers when the plants are in bloom. The inflorescence is a distinct aerial spike growing to 30 cm, the flowers have six stamens, and the fruit is a 3-chambered seed capsule

Common Water Hyacinth, is an aquatic plant native to the Amazon basin, and is often considered a highly problematic invasive species outside its native range. Its habitat ranges from tropical desert to subtropical or warm temperate desert to rainforest zones. It tolerates annual precipitations of 8.2 dm to 27.0 dm (mean of 8 cases = 15.8 dm), annual temperatures from 21.1°C to 27.2°C (mean of 5 cases = 24.9°C), and its pH tolerance is estimated at 5.0 to 7.5. It does not tolerate water temperatures >34°C. Leaves are killed by frost and salt water, the latter trait being used to kill some of it by floating rafts of the cut weed to the sea. Water hyacinths do not grow when the average salinity is greater than 15% that of sea water. In brackish water, its leaves show epinasty and chlorosis, and eventually die.[ This one was photographed near the Savannah River at the Silver Bluff Audubon Center near Jackson (Aiken County), SC.

Common Water Hyacinth, is an aquatic plant native to the Amazon basin, and is often considered a highly problematic invasive species outside its native range. Because of E. crassipes invasiveness, several biological control agents have been released to control it, including two weevils, Neochetina bruchi Hustache (Coleoptera: Curculionidae) and Neochetina eichhorniae Warner (Coleoptera: Curculionidae), and the moth Niphograpta albiguttalis (Warren) (Lepidoptera: Pyralidae). The plant is used as a carotene-rich table vegetable in Taiwan. Javanese sometimes cook and eat the green parts and inflorescence.