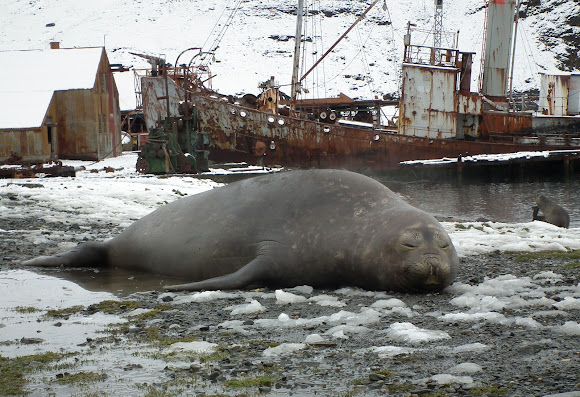 The largest pinniped, member of the Carnivora order and Antarctic seal. Females can be up to 3m long, while fully grown bulls can be almost 6m long. These seals tend to stay on land longer than most, and will also return to land for moulting (as they were here). South Georgia is a key breeding site for these animals. Like the Antarctic Fur Seal, they were hunted to near extinction by the end of the 19th century, but have made a recovery. As of 2002, 2 of the 3 main populations are declining, but it is still classed as Least Concern.

These elephant seals were either lying on the shingle beaches or in muddy trenches around King Edward Point and Grytviken, South Georgia.

They were definitely gentle giants, especially as the large bull males had already returned to the ocean at this point. All that remained were adult females and recently weaned juveniles. The seal in the first two pictures was enormous, probably close to the 3m mark, but was very indifferent to our presence (unlike the fur seals!). The young males in the mud bath (last picture) were making some terrible roaring sounds! I couldn't get many pictures of the males in the mud because there were so many fur seals around, I had to run to the safety of the whalers' cemetery haha!

Thanks everyone! And Dan, the history was indeed just as fascinating as the wildlife. There were a lot of old sealing ships just sitting there rusting (you can see one in the background of the first picture)... there was a sort of beautiful irony in seeing the ships responsible for the near extinction of the elephant and fur seals slowly decaying as the populations of the two animals boomed around them.

Amazing! I've read so much about Antarctica, it would be just as cool to see all the old whaling stations as it would the wildlife. Nice to see them both together!