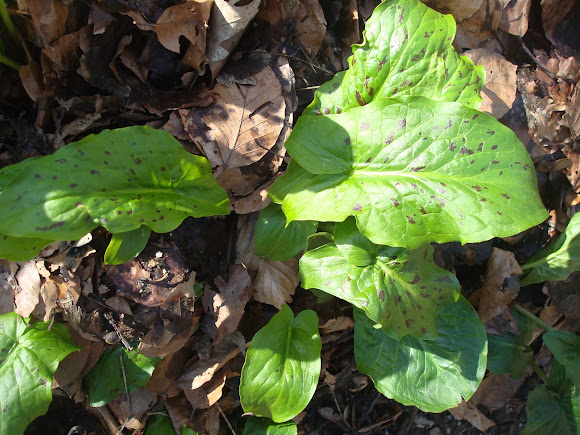 Arum maculatum is a common woodland plant species of the Araceae family. It is known by an abundance of common names including Wild arum, Lords and Ladies, Devils and Angels, Cows and Bulls, Cuckoo-Pint, Adam and Eve, Bobbins, Naked Boys, Starch-Root and Wake Robin. The purple spotted leaves of Arum maculatum appear in the spring (April–May) followed by the flowers borne on a poker shaped inflorescence called a spadix. The purple spadix is partially enclosed in a pale green spathe or leaf-like hood. The flowers are hidden from sight, clustered at the base of the spadix with a ring of female flowers at the bottom and a ring of male flowers above them.

It is widespread across temperate northern Europe.

In autumn the lower ring of (female) flowers forms a cluster of bright red berries which remain after the spathe and other leaves have withered away. These attractive red to orange berries are extremely poisonous. The berries contain oxalates of saponins which have needle-shaped crystals which irritate the skin, mouth, tongue, and throat, and result in swelling of throat, difficulty breathing, burning pain, and upset stomach. However, their acrid taste coupled with the almost immediate tingling sensation in the mouth when consumed mean that large amounts are rarely taken and serious harm is unusual. It is one of the most common causes of accidental plant poisoning based on attendance at hospital A & E departments