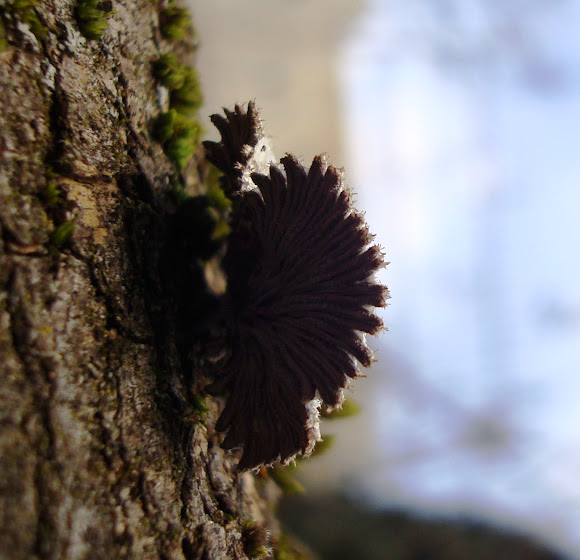 The cap is shell-shaped, with the tissue concentrated at the point of attachment, resembling a stem. It is often wavy and lobed, with a rigid margin when old. It is tough, felty and hairy, and slippery when moist. It is greyish white and up to 4 cm in diameter. The gills are pale reddish or grey, very narrow with a longitudinal split edge which becomes inrolled when wet; the only knows fungus with spit gills that are capable of retracting by movement. It is found predominantly from autumn to spring on dead wood, in coniferous and deciduous forest.

It is common in rotting wood during spring and autumn, but apart from being problematic for plants it can also cause disease in humans. This one was found on hornbeam trunk.

Although European and US guidebooks list it as inedible, this is apparently due to differing standards of taste rather than known toxicity, being regarded with little culinary interest due to its tough texture. S. commune is, in fact, edible and widely consumed in Mexico and elsewhere in the tropics. The authors explain the preference for tough, rubbery mushrooms in the tropics as a consequence of the fact that tender, fleshy mushrooms quickly rot in the hot humid conditions there, making their marketing problematic.

"Please refrain" is like I'm doing it purposely??? Can't you guess that I have truly no benefits of adding sth in the wrong group??? REFRAIN, can you at least try to think about what you write since you have this status of ranger or you wanna just maintain your primitive approach?

OK I guess the description was very clear? NOT

Your European spottings are being removed from the NE USA mission. Please refrain from adding spottings to local missions which are outside the area of your spotting.