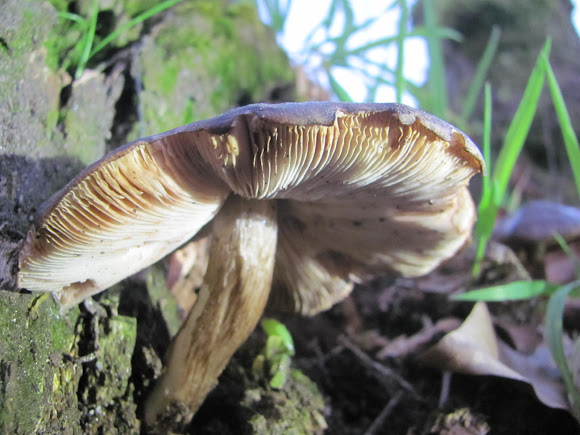 The species name, cervinus, although generally thought to refer to the colour of the cap, actually refers to antler-like protrusions on its prominent thick-walled pleurocystidia (of which there can be one to three).[3][4] The spore size is approx. 8×5μ. The cap can be deer-brown, but vary from light ochre-brown to dark brown, with a variable admixture of grey or black. The centre of the cap may be darker. The cap can be up to 15 cm in diameter, but is often much smaller. Initially it is bell-shaped, and often wrinkled when young. Later it expands to a convex shape. The cap surface is smooth and matt to silky-reflective. The cap skin shows dark radial fibres when seen through a lens, indicating that the microscopic cuticle structure is filamentous. The spore print is salmon-pink to reddish-brown. The gills are initially white, but soon show a distinctive pinkish sheen, caused by the ripening spores. The stipe is 5-12 cm long and 0.7-2.0 cm in diameter, usually thicker at the base. It is covered with brown vertical fibrils on a white ground. The flesh is soft and white. The mushroom has a mild to earthy radish smell and a mild taste at first, which may become slightly bitter

It grows on dead wood or wood remains.