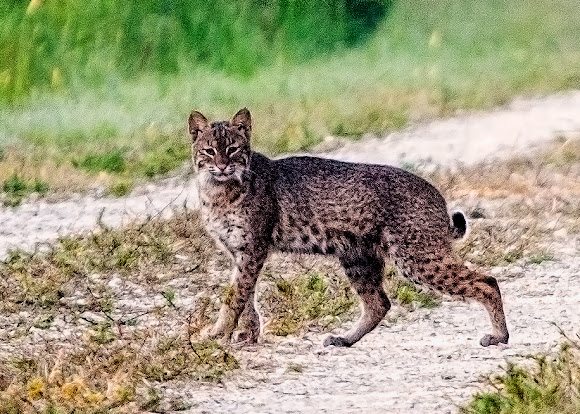 The bobcat is about the size of a medium-sized dog. I think this one is a male because it is rather large. Male bobcats average 39 inches in length and weigh about 24 pounds, while females are closer to 36 inches in length and 15 pounds in weight. The bobcat is so named because of it's 'bobbed' tails, which are usually 5-6 inches, although tails as long as eighteen inches have been recorded! The bobcat fur is short, soft, and dense. Its color is dark brown with black spots.

This Bobcat was spotted on the Ten Thousands Island Marsh Trail in the Everglades. A bobcat's territory in the wild is about 5-6 square miles. They are highly adaptable, thus may be seen in an urban or suburban environment or deep in the forest. I have seen Bobcats near my rural home, in the woods near suburbs, in woodlands, marshlands and swamps. A very efficient hunter, Bobcats will adapt their diet to the environment and the season. They prefer to eat small mammals, such as rabbits, opossums and small raccoons, but will also eat ground dwelling and wading birds.

This Bobcat claimed territory in a marsh known for resident and migratory birds. I saw the feathers of a migratory cat bird which I am sure was a snack for the bobcat. The most fascinating thing I find about Bobcats is their ability to move so quietly. This trail was surrounded by thickets of mangroves and water on both sides, but the Bobcat crossed the trail and disappeared without a sound.

In a blink of an eye! Amazing that you spot it as it was crossing the road!! I love your image Donna!

Thank you, I was thrilled by the sight of this very illusive cat.