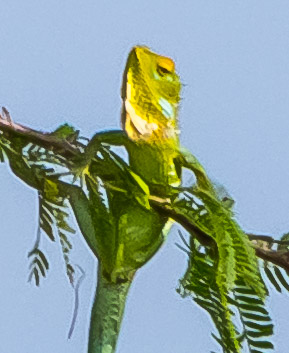 second photo seen with a Baya Weaver bird nest. Bundala National Park is an internationally important wintering ground for migratory water birds in Sri Lanka. Bundala harbors 197 species of birds, the highlight being the greater flamingo, which migrate in large flocks. Bundala was designated a wildlife sanctuary in 1969 and redesignated to a national park on 4 January 1993. In 1991 Bundala became the first wetland to be declared as a Ramsar site in Sri Lanka. In 2005 the national park was designated as a biosphere reserve by UNESCO, the fourth biosphere reserve in Sri Lanka.

Glad you've discovered it, better late than never! No, I've never heard of it. I'm more old school and have a huge library of reference books and guides that I always try first.

I just discovered Noah in the course of using the new "Lens" feature of the google photo app on my android. It uses A/I to ID species with amazing accuracy despite flaws in framing, focus, angle, age variation, etc. have you ever heard of it?

Sure, I will take a look and help if I can. Yeah, I'm the real deal haha. I've been on Noah since near inception, going on almost 10 years!

yes, thanks, I see all your credentials now and am confident. any help on my other unidentified photos would be appreciated!

No problem. Yes, if you agree with the ID, you can update the spotting now. If you don't you can wait for more people to '+' on the ID but I'm pretty sure on this one. This isn't like iNaturalist, you don't have to wait to be verified or anything like that.

thanks so much. does this mean I should go ahead and change the spotting or am I supposed to wait for some sort of consensus?

It can be tough sometimes to identify something from a common name, but in this case your guide was right on. It's also known as the common green forest lizard.

My spotter/tracker on the safari said this was a "green garden lizard," but wikipedia has no reference for that, and it doesn't look like any pictures I found of other garden lizards. Any thoughts?