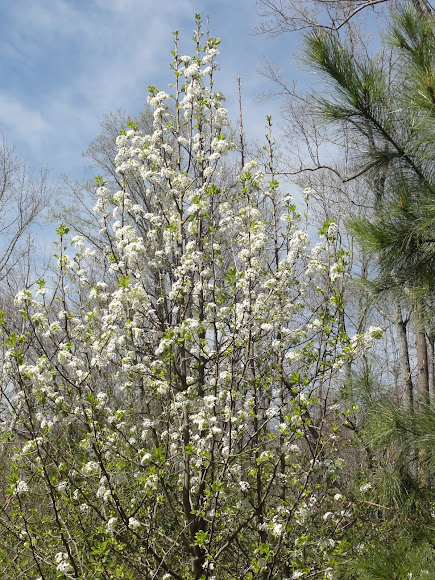 Callery pear, or Bradford pear, is an ornamental, deciduous tree that can grow up to 40 ft. (12.2 m) in height. Some non-sterile cultivars of this species have escaped and are invading natural areas throughout the eastern United States. The leaves are alternate, simple, 2 to 3 in. (5.1-7.6 cm) long, petiolate and shiny with wavy, slightly-toothed margins. The overall shape of the tree is often described as a tear-drop that often spreads out with age. Flowering occurs early in the spring (April to May) before the leaves emerge. The flowers are 1 in. (2.5 cm) wide, showy, malodorous and white. Fruits are round, 0.5 in. (1.3 cm) in diameter and green to brown in color.

The Callery Pear (Pyrus calleryana) is native to eastern Asia but planted widely as an ornamental in urban and suburban residential and commercial areas in the United States. Numerous cultivars have been developed and are clonally propagated. Wild populations of Callery Pear can now be found throughout much of the United States, generally in open or disturbed habitats.

Callery Pear was not long ago viewed as unlikely to become an invasive species in part because of its self-incompatibility. Like many plants, Callery Pear exhibits a gametophytic incompatibility whereby when pollen is transferred pollen tubes begin to grow down the styles of both compatible and incompatible flowers, but if the haploid pollen grain shares the same self-incompatibility allele as the diploid maternal tissue, the pollen tube is prevented from reaching the ovule. It is now apparent, however, that as a consequence of the increasing diversity of the cultivars being planted, and the sprouting and flowering of rootstocks that are from different genetic stock than the scion, this incompatibility is often circumvented. Numerous other traits (e.g., seed dispersal by birds, broad environmental tolerance, few pests. rapid growth, early reproduction, and heavy fruit set) facilitate the rapid spread of the Callery Pear. Naturalized Callery Pears often form dense thickets and these are often thorny since even thornless cultivars apparently retain genes for thorniness that may be expressed in their mixed ancestry progeny.