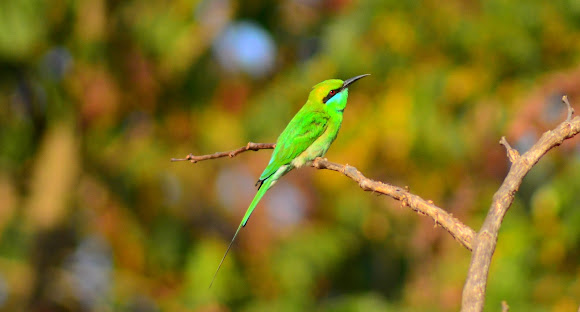 The Green Bee-eater (Merops orientalis) (sometimes Little Green Bee-eater) is a near passerine bird in the bee-eater family. It is resident but prone to seasonal movements and is found widely distributed across sub-Saharan Africa from Senegal and The Gambia to Ethiopia, the Nile valley, western Arabia and Asia through India to Vietnam

This is an abundant and fairly tame bird, familiar throughout its range. It is a bird which breeds in open country with bushes. In Africa and Arabia it is found in arid areas, but is more diverse in its habitats further east. This species often hunts from low perches, maybe only a metre or less high. It readily makes use of fence wires and electric wires. Unlike some other bee-eaters, they can be found well away from water

A very common bird found all over Belgaum. This one was spotted at Bhutramatti.

Beautiful!
Welcome to the community Mrinal!

this one too brilliant.