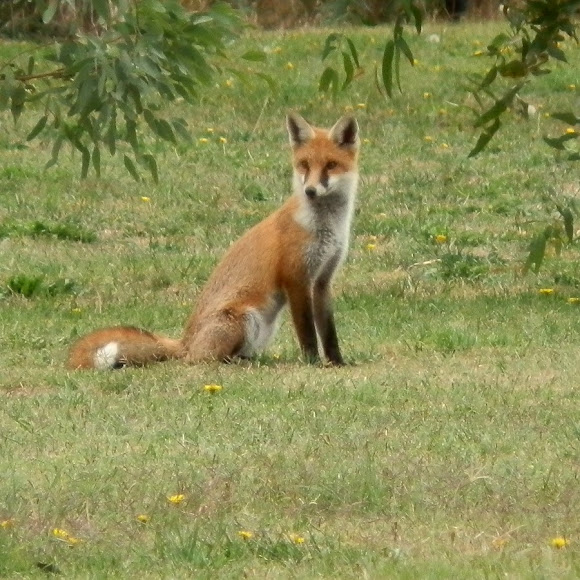 With a reddish coat, red foxes have an elongated body, a bushy tail which is longer than half the body length and dark fore legs.

Introduced into Australia in the 1830s, they are a pest throughout mainland Australia. The red fox is responsible for the decline in numbers of several native native animals.

This fox was spotted in a marshy "reserve" where water birds nest and breed. He spotted me and quickly retreated to the fence and soon disappeared into the bush through the fence. The fence is obviously not keeping him/her out !

Ah, here in North America where they are uncommonly seen we love to see red foxes! But out of their native environment, it appears, they become pests.

Here in West Virginia we complain about the white-tailed deer as "vermin" that eat up the gardens (while grudingly admitting their beauty perhaps) while people from other areas are delighted to visit here and see meadows with ten or twelve deer.

You are so right Despina. The introduced plant or animal always suffers. Humans just say Oops, that was a mistake !... it continues to this day which is the worst.

There's so many introduced animal and plant species in Australia, I can't tell wich is the most destructive, the list is huge! But I think that the arrogant human ignorance was by far, the worse...

joacos1, I think red foxes are cute too but they are not native to Australia and they kill a lot of native australian animals which is really sad.
Anyway, you have the Pampas Fox which is native to the pampas -they look really interesting !

As wild animals go, I think he's really an attractive creature. It's a pity he is so destructive!

Sadly a twenty minute walk equals 3 vulpes and 1 felis hunting at midday! Horrible to think what they're doing to the natives but even they are struggling in the dry.

Great spot, Leuba. I've never seen one out in the open like this during the day.