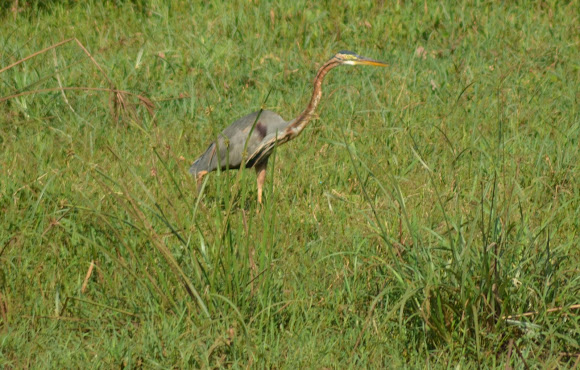 I spotted this heron in the backwaters of Rakaskop near Belgaum yesterday.

The Purple Heron breeds in colonies in reed beds or trees close to large lakes or other extensive wetlands. It builds a bulky stick nest. It feeds in shallow water, spearing fish, frogs, insects and small mammals. It will often wait motionless for prey, or slowly stalk its victim. It tends to keep within reedbeds more than the Grey Heron, and is often inconspicuous, despite its size. It has a slow flight, with its neck retracted. This is characteristic of herons and bitterns, and distinguishes them from storks, cranes and spoonbills, which extend their necks. The long neck of Purple Heron looks particularly snake-like, with more of an S-shape in flight. The call is a loud croaking "krek".

The Purple Heron is a wading bird in the heron family Ardeidae, breeding in Africa, central and southern Europe, and southern and eastern Asia. The European populations are migratory, wintering in tropical Africa; the more northerly Asian populations also migrate further south within Asia. It is a rare but regular wanderer north of its breeding range.