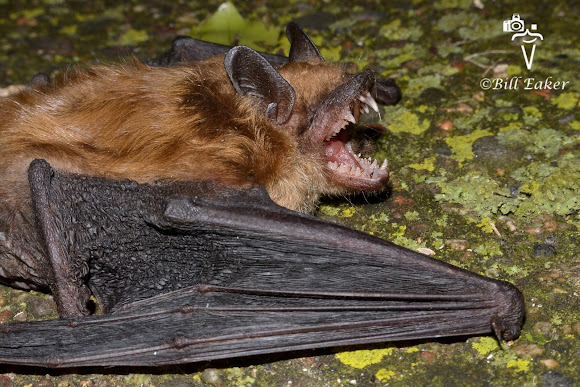 I had to remove two bats from my sister-in-law's house as they were causing problems. The situation was odd in the fact that the previous owners of the house had screwed in a plastic container in the rafters to catch water from a leak in the room. My sister-in-law did not know about this at all, however, she heard scratching from above the ceiling panels. She could see the bats trapped in the container, as it was transparent. Had the bats remained in this container, they would have surely died. This particular individual was a bit perturbed (understandably) at first, but then calmed down for some nice portraits. The bats were moved to safe location and should be just fine.

Thank you very much bayucca, as that means a lot to me. I see there is still a little bit of a rukus going on about it on FB. Lesson learned on including full details about spottings.

Thanks Bill for your effort and also the great respond to the critical issue about these pictures. I think it is in these cases it is always important to get the full story behind.

Thanks again Caleb! I'm always thankful for your comments.

Nice series Bill and a good spotting. Thanks for sharing.

GeoffryGomes, I do appreciate and respect your passion regarding the image and protection of bats, as I have a great love for them as well. I want to thank you for bringing something to my attention, and that is the lack of detail that I put into my spotting reports. Detail is very necessary, especially in a situation such as this. My report has been edited to include those important details.

However, I do not understand the attack on Project Noah regarding this series of photos. The lack of detail is completely on me. Project Noah does so much to educate people on the natural world through many wonderful peoples’ experiences with nature. And just to make this clear, this was MY experience. The bats had to be removed. I did not forcefully remove them from their roost. They were perishing, and something had to be done. Was the bat distressed? Absolutely, but probably not as distressed as it would have been had it remained in the container that it was trapped in. I did capitalize on the situation and take photos, and I would do this again. I document all of my wildlife experiences with photos they way it happens, and this one is not any different. The bat was not forced to stay put. I simply took photos as it calmed down and gained composure.

Bats do get a very bad rap, and I have rescued several after having offered to help people with it. I also remove snakes for people that I know and relocate them. After hearing the horrible stories from people taking out bats with tennis racquets, and snakes with shovels or hoes, it’s the least that I can do. While I do not understand their fears, they are just that. Fear brings out the worst in people simply because they don’t understand. Of course, through education and thoughtful discussion, some of these fears can be changed. However, I do not feel that pointing fingers and public shaming are the ways to handle these situations. Why not just ask some thoughtful questions about the situation to gain some insight? A good conversation goes a long way.

I do understand that you are concerned about the image that bats have, but the reality of this circumstance is there. Humans and nature do not always coexist ideally the way that we want. However, I don’t think we can remove what is deemed “disgusting” from our experiences just because we don’t like it. If this were the case, we would have to remove every photo of a predator/prey situation, rescues, or agitated animals. Would that be truly educating others? This is not the reality of how nature works, and it would be a lie to portray it that way.

Thank you very much Desmond! I really appreciated it.

Geoffrey, there is no need to send the Project Noah app page a message, comment on the photo on that page, and comment here on the spotting with the same exact message in all locations. Your comment has already been responded to, but I will go ahead and post the response here as well since I assume you still haven't seen it:
"The bat is understandably a bit stressed. But we certainly applaud the spotter for safely moving the bat to an area where it would not come to any harm. While the situation is not ideal, it does show the bats ability to defend itself and will hopefully encourage people to use the proper precautions or to call the proper authorities when dealing with bats and other wildlife when they invade our homes. We do try our best to encourage folks not to disturb wildlife, but it seems to have been unavoidable in this instance. We love bats and all other wildlife here at PN."

Thank you very much Ashley, and thanks for the kind words Francisco, Luis, Marta, and amadeus!

Congrats and nice to see you back in PN! :-)

Congrats Bill, these great close-ups of the Little Brown Bat have been chosen as Spotting of the Day!

Thank you very much TarieKlinkBarbour!

Thank you Sckel, and thanks for noticing that I've been gone. Sometimes I just need a break from things and move on to another hobby for awhile. It keeps things balanced for me. Happy New Year to you too!

Great set of pictures and teeth!

Thanks for the kind words triggsturner and Stephanie!