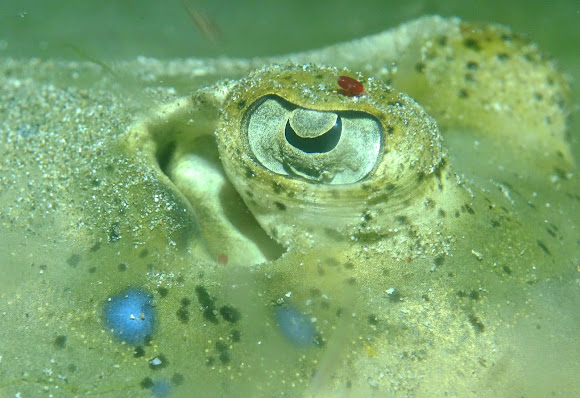 Not to be confused with bluespotted ribbontail ray. The bluespotted stingray (Neotrygon kuhlii) or Kuhl's stingray, is a species of stingray of the Dasyatidae family. It was recently changed from Dasyatis kuhlii in 2008 after morphological and molecular analyses show that it is part of a distinct genus, Neotrygon. The body is rhomboidal and colored green with blue spots. Maximum disk width is estimated 46.5 centimeters (18.3 in). It is popular in aquaria but usually not distinguished from the bluespotted ribbontail ray. The ribbontail has a rounded body, is a brighter green with brighter blue and more vivid spots, but the bluespotted stingray is larger. The stingray's lifespan is estimated thirteen years of age for females and ten years for males. The bluespotted stingray preys on many fish and small mollusks. The bluespotted stingray is also generally found from Indonesia to Japan, and most of Australia. The bluespotted stingray is also targeted by many parasites such as tapeworms, flatworms, and flukes. The bluespotted stingray has a flat disc-like rhomboid body up to 47 centimeters (19 in) in diameter and 70 centimeters (28 in) in total length. Their coloring is a dark green with blue spots with a light white underbelly also known as countershading. Its snout is very short and broadly angular along with its angular disc. The rays' bright coloration serves as a warning for its venomous spines. The ray has a very long tail accommodating two venomous spines on the base of the tail. The tail is about twice as long as the body of the ray, and the barbs or spines are two different sizes, one being very large and the other a medium-sized barb. The bluespotted stingray has bright yellow eyes that are positioned to allow them a wide angle of view. Since the gills are located ventrally, the spiracles allow water to reach the gills while resting or feeding on the benthos. The spiracles are located directly behind the eyes. The mouth is located on the ventral side of the body, which promotes the unique foraging technique of stingrays. Rays are normally solitary individuals but can occur in groups. One unique characteristic of the bluespotted stingray is that they rarely bury themselves in the sand, only to hide from predators, unlike the majority of stingrays who bury themselves regularly to hunt.

Mostly in sandy bottoms where they are able to bury themselves in the sand to hide during day time.

Pic#1 shows a parasite above its eyes. It actually has a few more around the body and face. Pic#2 is of another animal to show the whole body/animal.