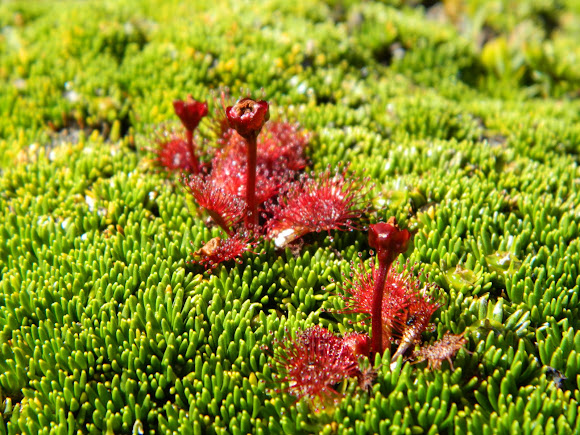 Drosera uniflora is a species of carnivorous plant of the genus Drosera native to southern Argentina, Chile and the Malvinas Islands. It is a small dew of sun with a solitary white flower as its name indicates. The glands located in their leaves, which secrete a sticky mucilage at the ends, are used to capture and retain prey of insects, from which the plant obtains the nutrients that it can not obtain in sufficient quantities from the soil. It was formally described in 1809 by botanist Carl Ludwig Willdenow.

As usual in the drosera, D. uniflora lives on nutrient-poor soils (soil used in the broadest sense as everything that stimulates growth), and is based on insects to complement their nutritional requirements. But unlike most of the genus, it prefers to have its roots in the water, and can be found in marshes, moorland or areas with lots of water that lack nitrogen and organic phosphorus, nutrients that it receives from the insects it catches and digests. In Chile it grows in the mountains near the ocean at altitudes between 500 and 2000 meters; Usually in the north facing slopes or level areas, as it enjoys the sun. In addition to the Malvinas Islands, it has been found in Tierra del Fuego and the northern end of the Patagonian forest. Although Barthlott et al. Has stated that it was found growing on Clarence Island of the Antarctic coast, it seems more likely that there was a confusion with Clarence Island (Chile), since in Antarctica only two plants with flowers are known, neither of which is D Uniflora.

Etymology Drosera: both its scientific name - derived from the Greek δρόσος (drosos): "dew, dew drops" - as the vulgar name - sunroot, which derives from the Latin ros solis: "sun dew" - refer to the bright Drops of mucilage that appear at the end of each leaf, and that remember the morning dew.

Dear larkinpb, the photograph found on Wikipedia is mine. In the credits you can see my name. Prior to that, there was no photographic record on that website. regards

Did you copy this picture off of Wikipedia? Because it looks exactly the same as the one in https://es.wikipedia.org/wiki/Drosera_un...