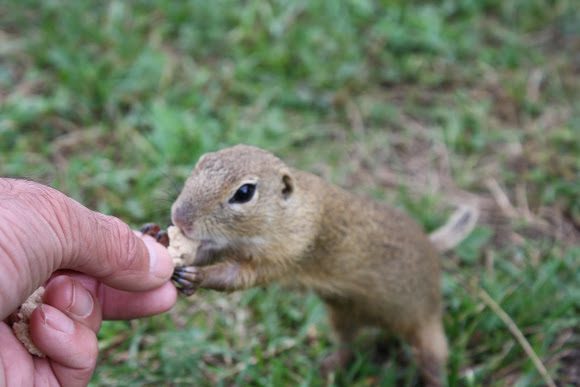 The European Ground Squirrel grow to be about 20 cm in length and weigh around 300 grams, it got brown short fur and a small tail, its ears are small and close to the head as an adaption for living under ground. They live in colonies where sentinels are on the lookout for predators, in which they give a warning signal that bring every squirrel rushing back to their tunnels for safety. This species is in decline due to loss of habitat as they require a spesific kind of steppe grassland in order to dig their tunnels. It is believed that the population has diminished with over 30% in the last ten years because of conversion of steppe-grassland to high grass meadows and because of forestry, urbanization and road building. They are listed as VU(vulnerable) in the IUCN red list of threatened species.

Muránska planina National Park, is the youngest of the national parks in Slovakia as it got the status as a national park in 1997 due to its rich diversity of rare and endagered species both flora and fauna. The park has over 300 km of hiking trails with two of them being educational trails and have other attractions as the Muráň castle or limestone caves. https://en.wikipedia.org/wiki/Mur%C3%A1n...

The steppe-grassland is opened for tourism and has made the ground squirrels accustomed to being fed by humans. They will still be on edge, but sometimes they get really close, close enough you can feed them from your hand as long as you don't make sudden quick moves and threatening postures. It was really quite an awesome experience.

Wow! Thank you for the nomination, I've never been nominated before I think. I'm truly honored. I hope my spottings will continue to make some mark on people and the community of projectnoah. I will try my best :)

Lovely pictures. I love the 5th so much! And thanks for your notes.

Thanks, spent some extra time on this one since it was a very cool experience and that it's a redlisted species.

Lovely spotting, and great notes too! Squirrels are one of those animals that always manage to put a smile on people's faces. Thanks for sharing, Gaia80.