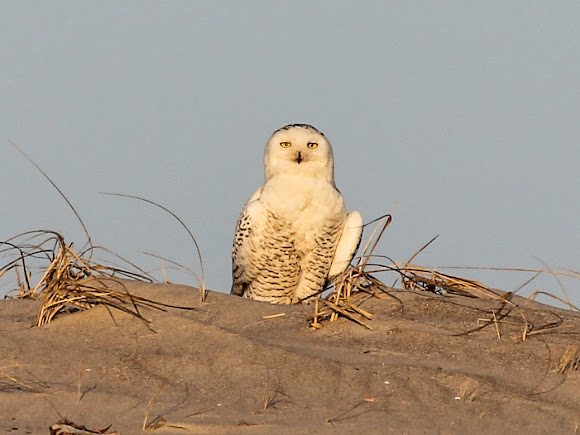 A Snowy Owl sitting on the dunes near Delaware Seashore State Park. The Snowy Owl irruption of 2013-2014 has been record setting in many states along the Atlantic coast. As many as 10 of these owls are believed to have been in my home state of Delaware this year; the first winter since 2005 that they've been recorded here. These owls have flown thousands of miles from their homes in the arctic tundra of northern Canada.

Sand dunes by the Atlantic Ocean, a few hundred feet from a highway.

Nice series! I hope he makes it back home!

I reported it to ebird. I've read that they prefer sand dunes when they're down this way because the habitat features are similar to the landscape in their home range.

Your reported the sighting to ebird?

With the Snowies Invasion it is funny seeing them sitting on sand dunes instead of snow.