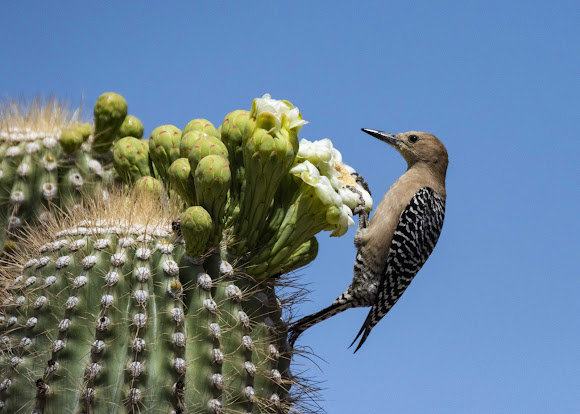 The saguaro is the largest cactus in the US. It can grow as high as 40 feet, and weigh as much as two tons. They can live as long as 150 to 200 years. At about 75 to 100 years, the cactus may grow arms, and can develop as many as up 40 to 50. This posting focuses mainly on the saguaro flower, which is the state wildflower of Arizona.

Saguaros are confined mainly to the Sonoran Desert in Arizona, the Mexican state of Sonora, and the Whipple Mountains and Imperial County areas of California. While the Sonoran exhibits typical harsh desert conditions, its biseasonal rainfall pattern results in more plant species than any other desert in the world, including the saguaro cactus. The saguaro is a critical component of the Sonoran Desert ecosystem.

The saguaro cactus supports many species, including birds, insects, reptiles and mammals. The main trunk of the cactus provides shelter in cavities which are excavated by gila woodpeckers. Once abandoned by woodpeckers in subsequent years other birds, including pygmy owls, elf owls, european starlings (4th photo), and purple martins move in to nest and raise their young. As to the flowers, Bats feed on the flowers and nectar, along with birds including the gila woodpecker (1st & 3rd photos), bees and other insects. The flowers (2nd photo) open up at night, and last into the following afternoon, after which they fade…lasting less than 24 hours! They bloom generally once a year. Blooms first appear when the cactus is about 35 years old. After the flowers fade, they then mature into bright red fruit. The fruit ripens and splits open revealing a juicy red pulp, which contains as many as 2000 small black seeds. The fruit is then eaten by many species including finches, woodpeckers, doves, bats, tortoise, javelina and coyote, per the Arizona-Sonora Desert Museum. Such beauty in so little time!

Thanks to everyone, your comments are much appreciated!

Great series Jim,documenting in perfection the "ecologie" of the this amazing saguaro cactus,congrats on the well deserved SOTW and thanks for sharing

You were indeed in excellent company Jim, but the Spotting of the Week is yours! Congratulations. Your great photographic documentation and excellent notes on the ecology of this cactus won you the vote.

"Our Spotting of the Week depicts the fascinating ecology of the Saguaro Cactus (Carnegiea gigantea), a large cactus which is an essential component of the Sonoran desert ecosystem (southwestern USA and northern Mexico). Pictured here with the saguaro cactus is a Gila woodpecker (Melanerpes uropygialis), a specialized desert species that maintains a mutually beneficial relationship with the cactus. Gila woodpeckers perform an important function for the cactus in drilling out unhealthy flesh and removing disease-causing insects. As the diseased tissue heals and pulp hardens, the excavation site later becomes a nesting hole for the woodpecker. When abandoned by woodpeckers these cavities are in turn used by other birds as well as reptiles and rodents. Make sure to check the spotting for more images and to learn about the role of the saguaro flower".

Much appreciated, Daniele. Looking at the other nominations, I am in pretty good company!

Lots of interesting information to accompany the nice photos - thanks!

Your spotting has been nominated for the Spotting of the Week. The winner will be chosen by the Project Noah Rangers based on a combination of factors including: uniqueness of the shot, status of the organism (for example, rare or endangered), quality of the information provided in the habitat and description sections. There is a subjective element, of course; the spotting with the highest number of Ranger votes is chosen. Congratulations on being nominated Jim!