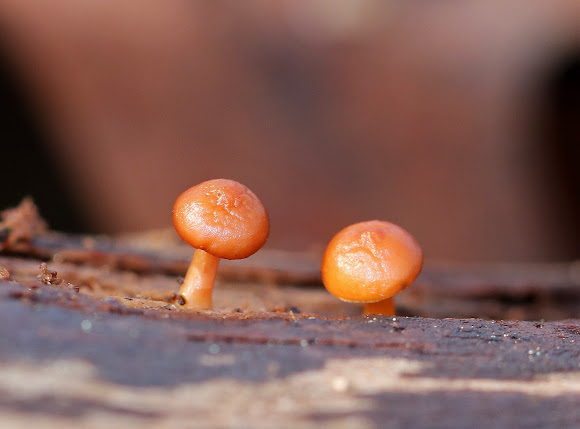 This species has the moniker "funeral bells", and is not a mushroom that you want to mess around with. The caps were tacky and orange-brown to cinnamon colored. Yellowish gills that were just beginning to run down the stem. This species has a stipe that is roughly the same width all the way down and has a fragile, cottony area left from the ring. This cottony zone is one of the most helpful physical features in identifying this deadly species. Caps were 1cm wide.

Growing on rotting wood in a swamp.

Galerina marginata has the same kind of toxins that the deadly Amanita species produce. These toxins, called amatoxins, are especially dangerous because they do not produce symptoms for 6-24 hours. Because of the delayed onset of symptoms, the sufferer may not realize that the mushroom they ate earlier is the cause of their illness. Initial symptoms resemble food poisoning, but gradually worsen for a few days until there is a short remission. Unfortunately, the symptoms return within 24 hours, and after another week or so, the liver and kidneys fail. This will result in death unless a liver transplant is performed. There is a drug called Silibinin, which is derived from milk thistle, that may be useful in treating amatoxin poisoning - if it is administered soon after poisoning occurs.

Thanks Felix and subhojit!

Thanks António, Mark, and Liana for your comments :)

Thanks so much Danièle for SOTD! It's so important for people to have a healthy respect and understanding of mushrooms like these, especially since mistakes can be deadly.

This is a "scarry" spotting :-) so little and so powerfull,wow,great find Christine,congrats n the welldeserved SOTD and thanks for sharing this one and all of your great spotting page,very good work.

Congratulations Christine, your Funeral Bells are our Spotting of the Day:

"They may seem inconspicuous but these two little buttons are deadly! These Funeral Bells
(Galerina marginata) are our Spotting of the Day. Also known a deadly galerina, this fungus contains amatoxins, the same toxins found in the death cap (Amanita phalloides) and several other members of the genus Amanita. Amatoxins work by blocking a vital enzyme called RNA polymerase II, which is responsible for the production of messenger RNA. Messenger RNA is the template for the production of proteins, the building blocks of all cells; without protein cell membranes break down and cells are ultimately destroyed. Galerina marginata is widely distributed in the Northern Hemisphere and has also been found in Australia.
For more information: https://buff.ly/2FfyLLX "

Thanks armadeus and maplemoth. @armadeus - so true - you wouldn't want to mistake this for an edible!

Wow...definitely don't want that in your dinner. Great shot. Thank you for the information and for sharing Christine! :)