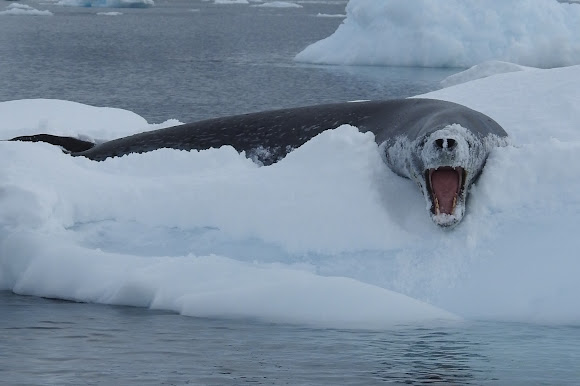 Large and in charge!

Leopard Seal. It slithered off and on this floe and all around and under our zodiac. Large and in charge! Affirmed its place - and ours... It is second - only to the orca - as Antarctica's top predators. As they grow in size they switch (from eating krill squid and fish) to eating 6 species of penguins and less frequently, they eat other seals, such as Crabeater Seal. Leopard seals have also been filmed eating Fur Seal pups. I photographed this one while on expedition with Robert Swan and 2041 Foundation's IAE 2016.

Now that is one cool catch!

This is pretty amazing. Antarctica is definitely on my bucket list. I've only ever flown over it. A great spotting, Laura, so congrats on your SOTD.

Thank you very much, Lisa and Daniele!!!

Congratulations LauraLOVESbirds! This Antarctic top predator made it to the top in our Spot of the Day!

Wow!!! THANK you very much, AshleyT!

I can feel the cold & ice ! Thanks for sharing this Laura.