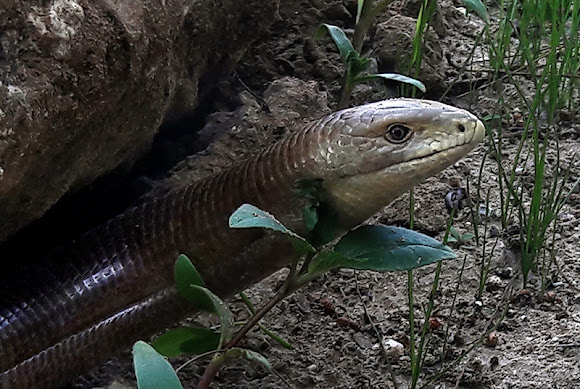 About 50-60 cm long but can grow to 135 cm. It is a species of large glass lizard found in southern Europe and Central Asia. It is tan colored, paler on the ventral surface and the head, with a ring-like/segmented appearance that makes it look like a giant earthworm with a distinctive fold of skin down each side called a lateral groove. Sheltopusik can be quickly distinguished from a snake by its ears, eyelids, and ventral scales.

It inhabits open country, such as short grassland or sparsely wooded hills. I found this one next to the tourist resort. It was trying to get across the road. We had to stop the traffic and let it pass.

Also commonly called Pallas' glass lizard or the European legless lizard. The released tail may break into pieces, leading to the myth that the lizard can shatter like glass and reassemble itself later.

Thank you :) Happy to share my spottings with you :)

Congrats Marek on your sotd.

Great series Marek,congrats on the SOTD and thanks for sharing

Congratulations Marek, your Sheltopusik is our Spotting of the Day:

"Snake or lizard? Lizard! This European legless lizard (Pseudopus apodus) is our Spotting of the Day. This rather large (up to 135cm long) member of the Anguidae lizard family has no forelimbs and only barely discernible stub-like hind legs. It can be distinguished from snakes by several criteria including movable eyelids and external ear openings. Like some other lizard species it is occasionally able to break its tail if threatened by predators, a feature known as caudal autotomy. This has given this lizard its alternative common name of "glass lizard". As the dropped tail may break into piece the legend went that this lizard could shatter like glass and later reassemble itself! This species is also known as sheltopusik, meaning "yellow-bellied" in Russian. Previously placed in another genus of glass lizards (Ophisaurus), it is now the only extant member of the genus Pseudopus".

Thanks Daniele, I had updated info.

Very nice spotting - we have glass lizards in our area but they are quite small. This one looks huge to me! Great shots.

Your spotting has been nominated for the Spotting of the Week. The winner will be chosen by the Project Noah Rangers based on a combination of factors including: uniqueness of the shot, status of the organism (for example, rare or endangered), quality of the information provided in the habitat and description sections. There is a subjective element, of course; the spotting with the highest number of Ranger votes is chosen. Congratulations on being nominated Marek!

Under Habitat, as per our guidelines could you please describe the actual habitat where your found the lizard. Generic information about habitat can go in your notes. Thanks in advance!

Thanks Neil, I found this one on the road and had to move it back to the grass. It was stressed and was trying to scare me hissing.

Amazing spotting, Marek. I'm surprised they grow to such a large size. What an unusual species.