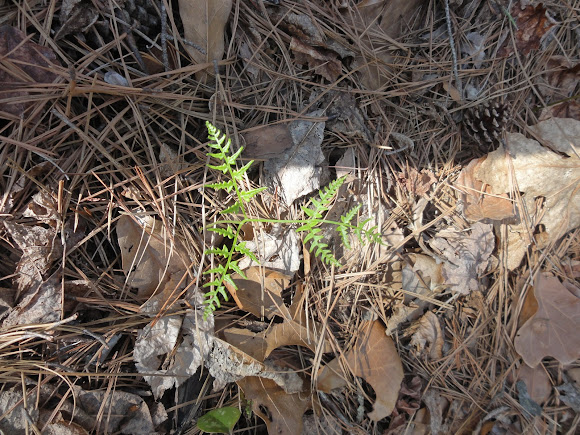 Bracken Fern is one of the most widespread ferns in North America.

Occurring in temperate and subtropical regions in both hemispheres. (The extreme lightness of its spores has led to its global distribution.) Bracken is an aggressive colonizer of disturbed and other successional habitats and has been considered an invader of pastureland. It has been shown to be allelopathic (to produce compounds that inhibit the growth of other plant species) and can form dense monocultures. It is difficult to eradicate or control and, because it is toxic, renders such pasturage unfit for grazing.

Thanks Dr P :) I'll keep an open mind fern-wise. Something among the royal fern family also crossed my mind. I hope I can get back up to check them out this weekend and see if the leaves have come out fully and maybe shed some light on this fern mystery. :)

I think it's a young bracken fern (Pteridium aqulinum) rather than a grape fern.