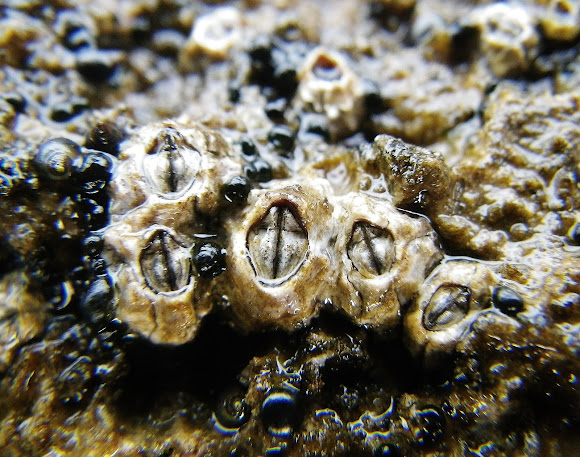 Sessile barnacle that attaches to rocks and other firm materials in the intertidal zone using its membranous base. It is basically cone-shaped but can assume a more tubular shape in a crowded colony. Like other sessile barnacles, as an adult is a suspension feeder that stays in its fixed shell and uses its feathery, rhythmically beating appendages – actually modified legs – to draw plankton and detritus into its shell for consumption. The chalky white shell has a kite-shaped opercular opening when it is a juvenile and an oval operculum opening when it is an adult. The shell is made up of six solid wall plates of approximately equal size. Its relatively narrow rostral plates remain separate from its rostrolateral plates and do not fuse. It has bright blue tissue with black and orange markings which can be seen when its opercular aperture is not tightly closed. Depending upon environmental conditions and the amount of food available, it can reach up to 14 millimetres.

Attached to exposed rocky shores in the mid to low eulittoral zone.