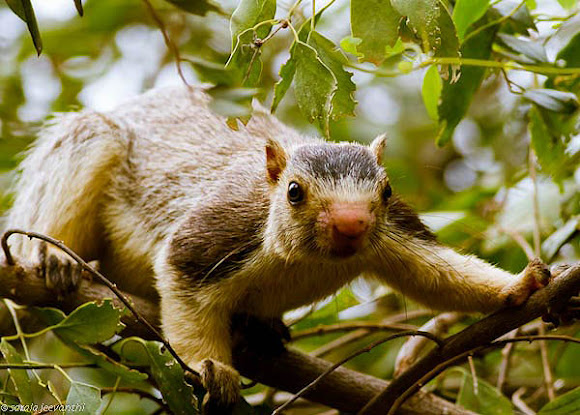 The grizzled giant squirrel (Ratufa macroura) is a large tree squirrel in the genus Ratufa found in the highlands of the Central and Uva provinces of Sri Lanka, and in patches of riparian forest along the Kaveri River and in the hill forests in the Tamil Nadu and Kerala states of southern India.[3] The International Union for Conservation of Nature (IUCN) lists the species as near threatened due to habitat loss and hunting. There are three subspecies, all of which are found in Sri Lanka. The subspecies R. m. dandolena (taken from the Sinhalese language name for the Grizzled giant squirrel, dhandu laena) is also found in India. Grizzled Squirrel Wildlife Sanctuary is located in Shenbagathoppu, Srivilliputtur, Tamil Nadu, India. R. macroura is the smallest of the giant squirrels found in the Indian subcontinent, with a head and body length of 25 to 45 centimetres (9.8 to 18 in), and tail measuring roughly the same or more), for a total length of 50 to 90 centimetres (20 to 35 in). It has small rounded ears with pointed tufts. The home range of an individual is between 1,970 and 6,110 square metres

Very cute but is really big! Almost the size of a cat (or possibly bigger...). :-O

Awesome spotting! Thanks for sharing. :)