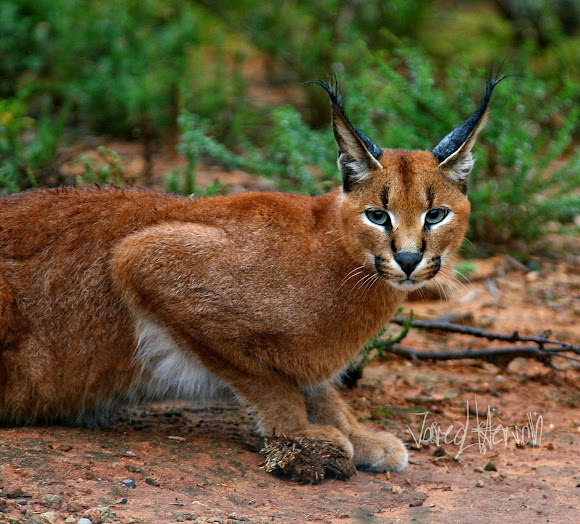 Finally I managed to get a sighting of this very elusive cat!

They occur at much lower densities in Central and West Africa where the carnivore community is more diverse. They occupy a wide variety of habitats from semi-desert to relatively open savanna and scrubland to moist woodland and thicket or evergreen and montane forest such as in the Western Cape of South Africa. They prefer drier woodland and savanna regions with lower rainfall and some cover.[2] They also occur in the Saharan mountain ranges and semi-arid woodlands.[

Hi Guys new picture added to this spotting, just had to share!

Fun fact! The saying, “to put the cat among the pigeons” was inspired by the caracal. This medium sized wild cat is capable of leaping into the air and knocking down up to a dozen birds at one time! Caracals were historically used for bird hunting in Asia and the Middle East. They were released into arenas with a flock of pigeons, and wagers were made as to how many birds each cat would take down. https://www.facebook.com/projectnoah/pho...

Thx everyone for your kind words!

I can feel the excitement!! It is a beauty, lovely animal, love those ears!! Thank you for sharing, Jared Hersch.

amazing spotting, congrats on the encounter jared and thanks for sharing