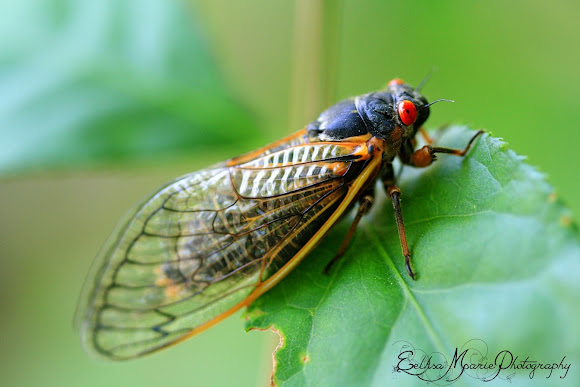 Periodical Cicadas emerge once every 17 years or every 13 years, depending on the species. For this reason they are often referred to as 17 year locusts or 13 year locusts. The photos in this spotting are of Magicicada septendecim, one of the 3 different varieties of Magicicada emerging in parts of the U.S. in the summer of 2016. Magicicada septendecim is distinguished from M. cassini and M. septendecula (the other two varieties of 17 year Cicadas) by broad orange stripes on the underside of its abdomen and the orange colouration visible behind its eyes and in front of its forewings. It's song also differs, and is often described as repeated phrases of "Pharaoh." (Which is why this particular variety is often also referred to as the "Pharaoh Cicada.") Like all periodical Cicadas, Magicicada septendecim spends most of its life under the soil. As larvae they feed on the juices contained in plant roots. Their adult life is comparatively short, only lasting for several weeks, during which time they mate and lay eggs. After mating, the females lay their eggs in slits in the bark of twigs and branches. The eggs hatch after 10 weeks and the newly hatched larvae fall to the ground and burrow under the soil where they will remain for another 17 years.

I found these amazing little Cicadas on the lower branches of trees, or on shorter bushes. I observed way more empty shells then hatched Cicadas. It was a warm, sunny afternoon, and they were mostly just sitting there. (Not really flying around). I did see one that was more recently hatched, and was still very pale, and I noticed that a few hadn't made it completely out of their shell and were being eaten by ants.