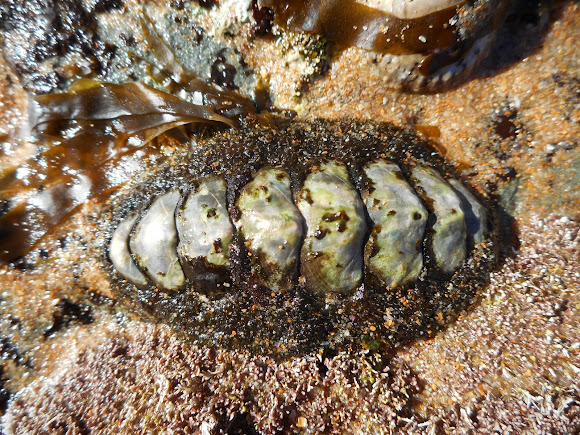 Chitons are molluscs commonly found along rocky shores, and Ischnochiton australis is the largest and most common species found in the Sydney coastal region, and grows to a length of 70-90 mm and a width of 40 mm. Australia has about 150 species of chitons and 90% of these are endemic. Chitons tend to hide in crevices and underneath boulders, and are well camouflaged among the surrounding rocks. The distinctive feature of all chitons is their eight overlapping plates, which protect them from predators and strong crashing waves. When disturbed they use their muscular, mucus-secreting foot to clamp down hard on rocks, making them difficult to dislodge. They are herbivores, and like the gastropod molluscs, chitons have a kind of rasping tongue with teeth, called a radula, used to scrape algae off rocks. They also have primitive 'eyes' embedded within their shell that are capable of detecting light and dark. Preferring the shelter underneath rocks, they will scurry away from the light when a boulder is overturned.

Ocean rock platform in surf zone, at North Avoca Beach on the NSW Central Coast. Usually found below mid-tide level to a depth of 12 metres.

When I saw the tide so low, my first thought was "tsunami", and I kept an ever-watchful eye. One never knows. This part of the rock platform is usually inaccessible, and the surf normally batters these rocks. I've been coming here since I was a boy, and it's over 40 years since I have seen the water level so low. I've never seen so much sand here either.

Thanks, Hema. They're really weird and so cool. And the beach is gorgeous. My favourite.

i love these chitons. i was fortunate to see 3 varieties on my recent tide pool visits. Have a look at them you get a chance. Chitons are very fascinating. Would love to see the creature move!