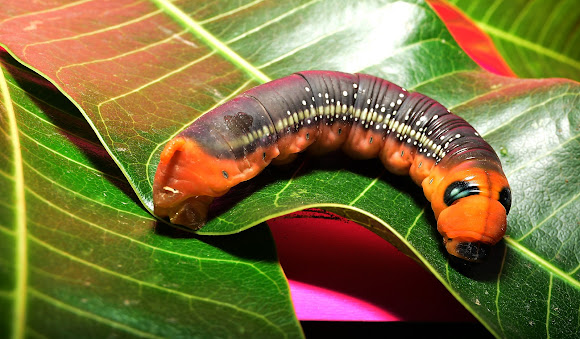 The strikingly colourful oleander hawk-moth (Daphnis nerii) is one of the most widely distributed Sphingidae species in the world. Adults of this large, attractive moth have intricately decorated forewings, displaying a mixture of olive greens, covered with small blotches of pink and white. They also have a pale streak on the tip of each forewing . The abdomen of the oleander hawk-moth is green or grey-green and has sloping sides, whitish lines, and three brownish-green spots on the sixth and seventh segments . This species rests with its abdomen curled upwards and can be distinguished from similar species by its large size and the white tip on its rear . Newly hatched oleander hawk-moth larvae are three to four millimetres in length, bright yellow, and have a black, elongated ‘horn’ on the rear of the body . As they get older, the larvae become green to brown with a large blue-and-white eyespot near the head and a yellow ‘horn’ on the rear . There is also a white band along the side of the body, with a scattering of small white and bluish dots alongside it. The spiracles on the sides of the body are black . Older oleander hawk-moth larvae measure around 7.5 to 8.5 centimetres in length. Just before it pupates, the oleander hawk-moth larva becomes browner in colour. The pupa of this species measures around 5.5 to 7.5 centimetres in length, and is light brown with black spots and a black line down the middle .