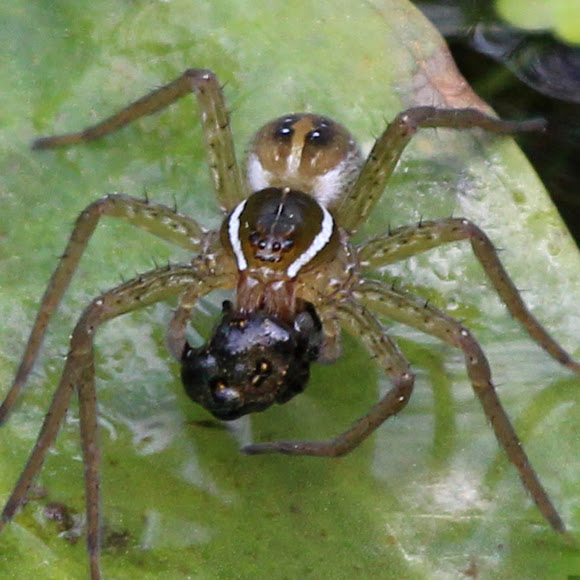 Series: In a pond full of tadpoles, I found this guy sitting on a floating leaf having lunch.

According to Wikipedia, https://en.wikipedia.org/wiki/Six-spotte..., "This species is diurnal which hunts during the day as it waits patiently for hours until depending on whether it is stimulated by prey. They are often seen with their legs sprawled out by the water while they are waiting for prey. These spiders eat other invertebrates, tadpoles and occasionally small fish. They hunt by the water’s surface in which they can walk on water and dive under up to 18 cm (7.1 in) to capture prey. Their good vision contributes to their success when diving to capture prey."

Congratulations Joseph R. Godreau, your fascinating spotting of predator with prey is our featured Spot of the Day!

You're right, I did. Thanks for catching that.

Great series Joseph! I think you may have added two missions by mistake (Interactions between different species of Arthropods and Identifying Animals Through Osteology).