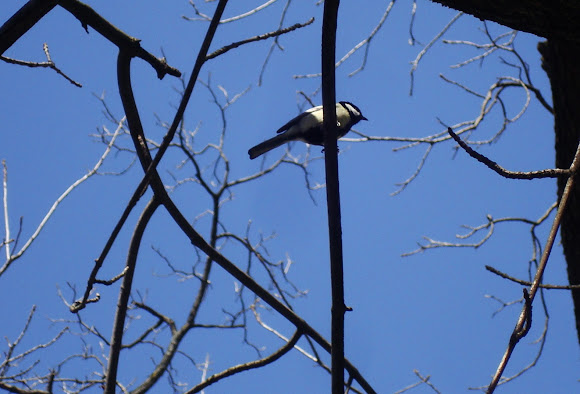 The Great Tit is a distinctive bird, with a black head and neck, prominent white cheeks, olive upperparts and yellow underparts, with some variation amongst the numerous subspecies. It is predominantly insectivorous in the summer, but will consume a wider range of food items in the winter months, including small hibernating bats. So....this apparently strange coloration white (or almost white) with black is due to birds age, the older the brighter and less yellowish.

It is a widespread and common species throughout Europe, the Middle East, Central and Northern Asia, and parts of North Africa in any sort of woodland. It is generally resident, and most Great Tits do not migrate except in extremely harsh winters.

It could be a great tit with white morph maybe. It's the only tit with that pattern in Croatia..

Stian, are you sure, cause it has black-white coloration on the chest part...