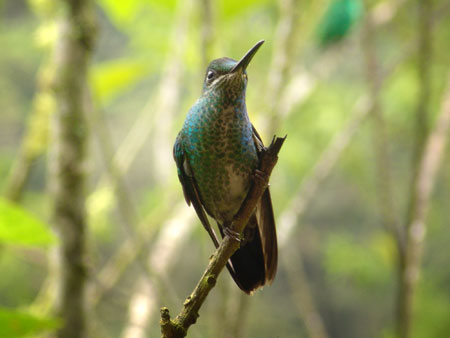 According to Wikipedia : "The Green-crowned Brilliant (Heliodoxa jacula) is a large robust hummingbird that is a resident breeder in the highlands from Costa Rica to western Ecuador. This hummingbird inhabits wet mountain forests including edges, gaps and tall second growth. It occurs typically between 700 m and 2000 m in altitude, mainly on the Caribbean slopes. The nest is a bulky cup of plant fibres and scales of tree ferns saddled on a thin downsloping branch. The female alone incubates the two white 16.5 mm by 11 mm eggs [1]. The male Green-crowned Brilliant is 13 cm long and weighs 9.5 g. It is mainly bronze-green with a glittering green crown, forehead, throat and breast. It has a white spot behind the eye, a small violet throat patch, white thighs, and a deeply forked blue-black tail. The female is 12 cm long and weighs 8 g. She differs from the male in that she has green-spotted white underparts, a white spot behind the eye and a white stripe below the eye, and a white-cornered shallowly-forked black tail.. Young birds resemble the adult of the same sex, but are duller, bronze-tinged below and have buff throats."