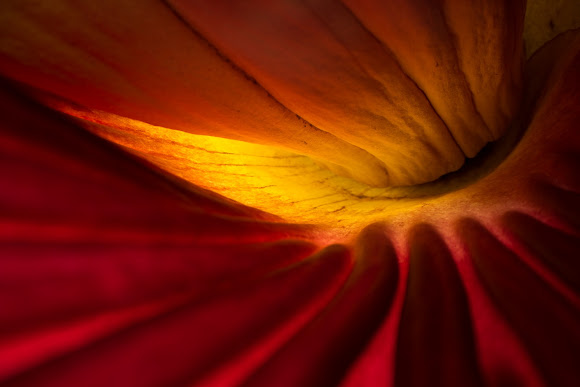 From the Encylopedia of Life: "The giant leaves and flowers of the titan arum are produced from an equally enormous tuber that lies under the rainforest soil, and acts as a food storage organ. Each year the leaf dies back before a new one develops but eventually the inflorescence begins to emerge in its place, growing at an amazing 10 cm a day. Once the spathe has unfurled in all its glory the female flowers are ready to receive pollinators. The spadix heats up emitting a putrid stench that has lead to the Indonesian name for this flower of 'bunga bangkai' or 'corpse flower'. It is thought that the smell helps to attract carrion beetles or sweat bees from far away; once inside the welcoming spathe they are trapped, unable to scale the smooth walls or the bulge in the spadix that tops the flowers. Male flowers release their pollen the next day and the appendix of the spadix begins to wither, thus allowing the insects to escape, brushing through the pollen on their way. This mechanism of consecutive flowering means that self-fertilisation is prevented. After flowering, the enormous spathe petal collapses and twists around the base of the spadix, protecting the developing fruit within. As the fruits ripen, the spathe completely rots away leaving the bright red berries on display to be eaten, and therefore dispersed, by rainforest birds such as hornbills."

The extremely rare Amorphophallus Titanum, also known as Bungai Bankai - "Corpse Flower" in Indonesia, is only found on the island of Sumatra. This specific flower, already a day or two past full bloom, was less than 25 meters from the small, rural village of Tandai, growing amongst a small grove of banana trees (which the villagers had recently cut down, as apparent in the pictures). I was told that when the flower was in full bloom approximately 2 days ago, they had to leave their homes because the stench of decaying flesh was unbearable. Villagers say that there is about 5 years, give or take, between flowerings of a particular plant. It seems to favor dappled shade over a thick canopy, with more frequent blooms when found in the former. The village of Tandai is on the edge of the Kerinci Seblat National Park, Sumatra, Indonesia.

***The first image is of the inside of the flower looking down, with the spathe on the bottom and the spadix on the top. The male and female flowers would be at the bottom of the spadix, but are not visible in the picture (I believe part of the spathe would have to be cut away to get access to them). ***The fourth picture shows the base of the spathe from the outside. Notice the spots which are meant to resemble lichens, hopefully fooling any herbivores into thinking the titan arum is an old, inedible tree trunk. ***For a size comparison, the fifth picture shows my 5'1" tall (155 cm) wife. ***For reference, the last picture shows a nearby Titan Arum still in leaf form. ***You can see the location of the flower in bloom and some of the nearby specimens in this google map: http://goo.gl/maps/M7HPD ***Also some more pictures of the area can be seen about halfway through this facebook album: http://on.fb.me/ZYt9rX

Oh! Congratulations on your new daughter! She's going to get a jump start on nature. Get her a camera fast!

I also should say that there was very little odor at the time I took the picture. When the flower is in peak bloom is when the odor is strongest. At that time, the spadix (which is mostly hollow) heats up to around 100 degrees Fahrenheit at the tip, which helps to further disperse the odor that attracts carrion beetles, flies, and other pollinating insects.

Thanks, Dan and Rieko. I feel incredibly lucky to be able to capture and share this wonder of nature.

Amazing series. Thank you so much for sharing these with us.

Amazing Luke! So lucky to see it in the wild.

Thanks, Smith Zoo! I did kinda sneak in a picture of her :D

I agree, VivBraznell! It's a great privilege to see one *anywhere*, but especially in the wild!

Out of this world! Congratulations on your new daughter and a beautiful flower to remember it by!

What a great set of images! Beautiful to see this plant in it's natural habitat ..

Thanks, Ava. A botanist that works at Kiel in Germany told me that (they had a titan arum bloom last year in their greenhouse, drawing over 12,000 people!). I was actually supposed to try to collect some of the pollinators for him, since they are apparently extremely under-studied in the wild, but unfortunately I had already missed the window of opportunity. Next time!

Nice series, and interesting information about the faux lichen!