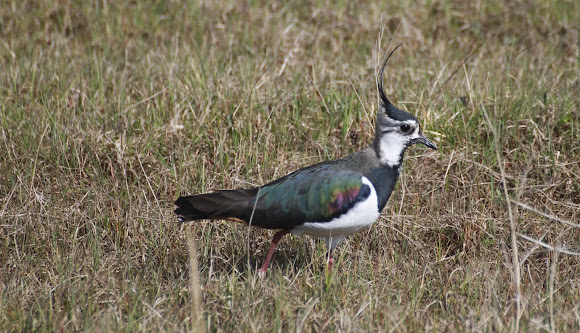 The Northern Lapwing (Vanellus vanellus), also known as the Peewit, Green Plover or (in the British Isles) just Lapwing, is a bird in the plover family. It is common through temperate Eurasia. It is highly migratory over most of its extensive range, wintering further south as far as north Africa, northern India, Pakistan, and parts of China. It migrates mainly by day, often in large flocks. Lowland breeders in westernmost areas of Europe are resident. It occasionally is a vagrant to North America, especially after storms, as in the Canadian sightings after storms in December 1927 and in January 1966. It is a wader which breeds on cultivated land and other short vegetation habitats. 3 – 4 eggs are laid in a ground scrape. The nest and young are defended noisily and aggressively against all intruders, up to and including horses and cattle. In winter it forms huge flocks on open land, particularly arable land and mud-flats.

Many of them breed on the grasslands in Terschelling. Some are not very shy, and you can take good pictures.

What a pretty bird!