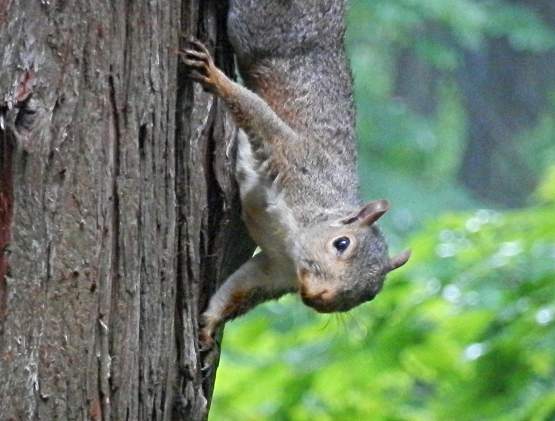 A common medium sized tree squirrel. With gray fur (sometime with touches of brown), a white underside and bushy tail. This native of the eastern and midwestern United States is also very common well outside of it's native area as well (including Britain where it is viewed as an invasive pest).

Tree Squirrels live in wooded areas but unlike other types of squirrels the Eastern Grey will also live in urban and suburban areas. Where foraging is abundant. They build nests of leafs and twigs called dreys high in the trees. Hollowed out portions of trunk trunk may also be used as nests, or as food storage.

This particular squirrel spent some time suspending himself head-downward (turning his rear feet around to grip the bark securely) on the side of a cedar tree while he pulled bits of bark off and gnawing on it.

Swapped the pictures around so the 'cute' one is first. The second, third, and fourth show the squirrel gripping the tree. (The second showing how they turn their rear feet around backward is my favorite)