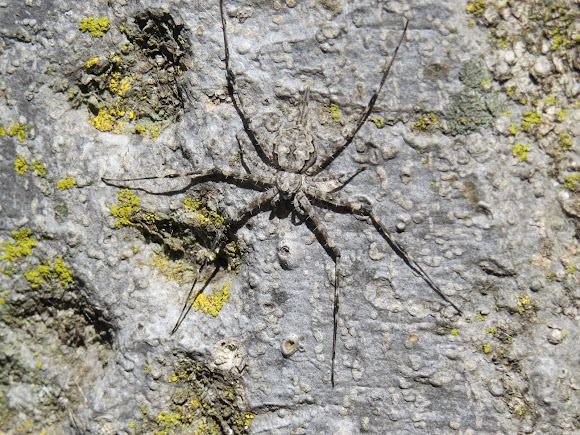 The Hersiliidae is a family of spiders noted for their elongated posterior lateral spinnerets which can be as long as the abdomen in long-spinnered bark spiders and less in rock living species. Hersiliids are small to medium (4.5-12.5mm body length) dorso-ventrally flattened spiders, especially the arboreal genera. They are cryptically coloured in variegated shades of cream, orange, green, brown, grey and black, features they share with the family Selenopidae. Both families are quick and difficult to capture as they disappear into the narrowest of crevices. As viewed from above, the carapace is oval with the 8 eyes situated in two recurved rows, on a raised hump or tubercle. The anterior median eyes are largest. The oval abdomen is wider posteriorly with the posterior lateral spinnerets extending out parallel to each other. The inner edge of these spinnerets is lined with silk-producing tubules (spine-like spigots) as opposed to the distally placed spigots of most spiders. The rupicolus genera have shorter spinnerets that are often not seen as they are curled up against the abdomen and the legs are shorter. Hersilia

Hersilia is a diurnal, arboreal genus which can sometimes be found on nearby rocks. They do not spin webs or construct retreats and can often be spotted only by the reflection of the sun on their dragline silk threads. They capture cursorial prey by swaying their long spinnerets over the victim and encircling it wrapping more silk over it. The prey is then bitten and consumed on the spot. The egg sac is wrapped in silk with bits of bark debris attached to aid camouflage.

The spider was the size of a adult hand.

Hi Ricardo this beautiful spotting should be in the Arthropod Category !