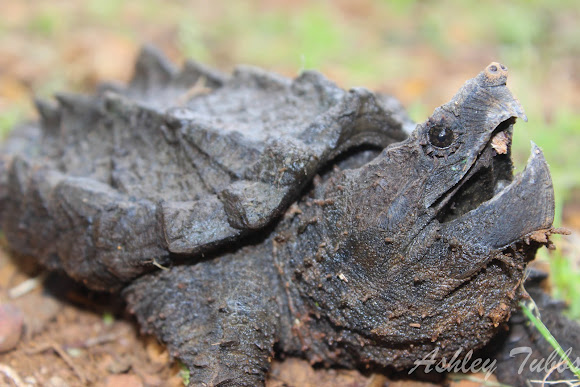 Spotting #700 :) The carapace has three distinct rows of raised plates, and the plastron is greatly reduced, showing lots of skin. The skin is dark and the head is very large. When feeding, they hold their mouths open and stick out their tongue which looks like a worm. Other turtles and fish go after the "worm" for a quick snack, where they end up being a snack for these guys! In waters where these guys are present, you will often see other turtles with pie-shaped wedges taken out of their shells where they got bit by one of these guys and got away. They can get upwards of 250 lbs, but this was a small one, less than 10 lbs.

Found in freshwater in the southeastern US. They typically prefer moving water, but I have found some in ponds as well. Found in East Texas at a national wildlife refuge.

Not known for it's sense of humour, I'll bet. An amazing animal and brilliant photo series. Well spotted, Ashley.

Good luck on your defense, Travis! :)

What a cute youngin! I'm defending my thesis on Monday, the topic of which is reintroduction of alligator snappers in OK!

Thanks Fyn! And I haven't seen a common snapper yet :)

aw i saw one about that size in MO

Thanks Maria and Karen :)

Fun fact! The alligator snapping turtle has evolved a unique hunting technique; its tongue sports a bright-red, worm-like protuberance that it wiggles whilst laying motionless on the riverbed, luring unsuspecting frogs and fish close enough to be snatched.

Thanks Mandy! He thought he was pretty threatening, but he was just adorable haha. No matter how small, they can still take off a finger so we were all careful around him :)

Wow! What an amazing and rare find. Lucky you :)
Awww, it's a little one. Cute and formidable at the same time!