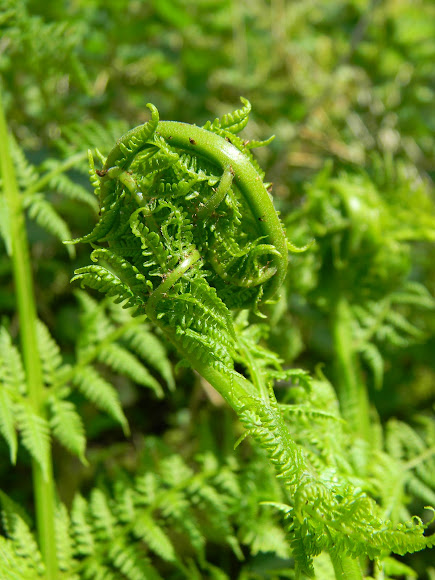 Athyrium filix-femina (lady fern or common lady-fern) is a large, feathery species of fern native throughout most of the temperate Northern Hemisphere, where it is often abundant (one of the more common ferns) in damp, shady woodland environments and is often grown for decoration. Athyrium filix-femina is now commonly split into two species, A. angustum (narrow lady fern) and A. asplenioides (southern lady fern). The southern lady fern has a broader frond, especially at the base. Both species are cespitose (the fronds arising from a central point as a clump rather than along a rhizome). The deciduous fronds are light yellow-green, 20-90 cm long and 5-25 cm broad. Sori appear as dots on the underside of the frond, 1-6 per pinnule. They are covered by a prominently whitish to brown reniform (kidney-shaped) indusium. Fronds are very dissected, being 3-pinnate. The stripe may bear long, pale brown, papery scales at the base. The spores are yellow on A. angustum and dark brown on A. asplenioides.