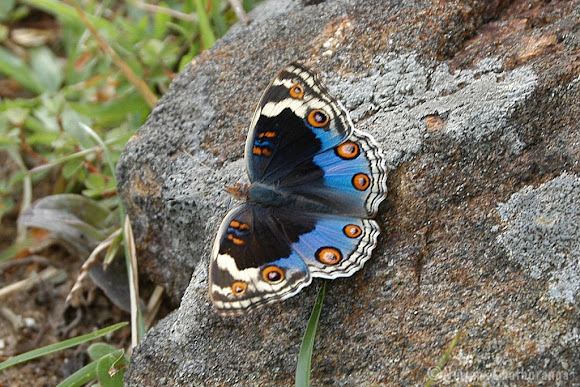 It is seen on path ways flying in the company of humans until they pass their territory. It is most active at the hottest time of the day. They are extremely difficult to approach, flying away rapidly when approached. It has a very direct and a swift flight but is very territorial and remains within a limited area. They are also extremely pugnacious, intercepting any insect that dares to intrude in to their space.

This species flies all over the island but is more common at moderate elevations such as elevations of 1000 feet. It generally inhabits dry, arid areas with short grass and rocks.

Thanks J! Thanks Mayra!

Thank you Gerardo and patty!

Beautiful butterfly Nuwan; its colors are magnificent. Maybe you can also include it in the "Blue in nature" mission. Greetings =)

The linear coloured markings on the black patches look like a pair of eyes - cat's, maybe ? Really beautiful, Nuwan.