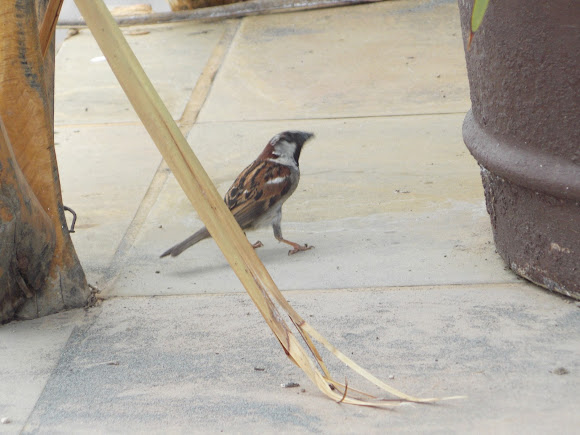 The House Sparrow (Passer domesticus) is a bird of the sparrow family Passeridae, found in most parts of the world. A small bird, it has a typical length of 16 cm (6.3 in) and a weight of 24–39.5 g (0.85–1.39 oz). Females and young birds are coloured pale brown and grey, and males have brighter black, white, and brown markings. One of about 25 species in the genus Passer, the House Sparrow is native to most of Europe, the Mediterranean region, and much of Asia. Its intentional or accidental introductions to many regions, including parts of Australia, Africa, and the Americas, make it the most widely distributed wild bird.

The House Sparrow originated in the Middle East and spread, along with agriculture, to most of Eurasia and parts of North Africa. Since the mid-nineteenth century, it has reached most of the world, due chiefly to deliberate introductions, but also through natural and shipborne dispersal. Its introduced range encompasses most of North America, Central America, southern South America, southern Africa, part of West Africa, Australia, New Zealand, and islands throughout the world. It has greatly extended its range in northern Eurasia since the 1850s, and continues to do so, as was shown by the colonisations around 1990 of Iceland and Rishiri Island, Japan.The extent of its range makes it the most widely distributed wild bird on the planet.