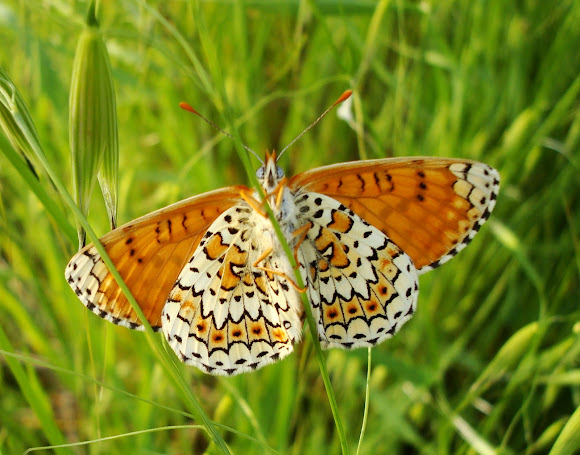 The animal spends most of its life as a black, spiny caterpillar. Butterfly lives only a few weeks. It is a medium sized orange, black and white "checkerspot" butterfly inhabiting open meadows. The males patrol along roads and habitat edges, on the lookout for the less conspicuous females which remain in dense tussocks for long periods. Mating occurs around mid-day, and as the female often continues to fly from flower to flower, mating pairs are conspicuous.

The Glanville Fritillary inhabits open grassland throughout Europe (except much of Great Britain, Scandinavia, and southern Spain) and temperate Asia (from the middle east to Mongolia.). A subspecies inhabits North Africa (Atlas mountains of Morocco). Severe population declines are reported in many European countries.

What a beauty! Nice series :)

It's a pretty interesting butterfly, it provides you an interactive spotting by changing its sides from under to above ;)

love white and orange side of this butterfly! :)

Beautiful on both sides, :-)