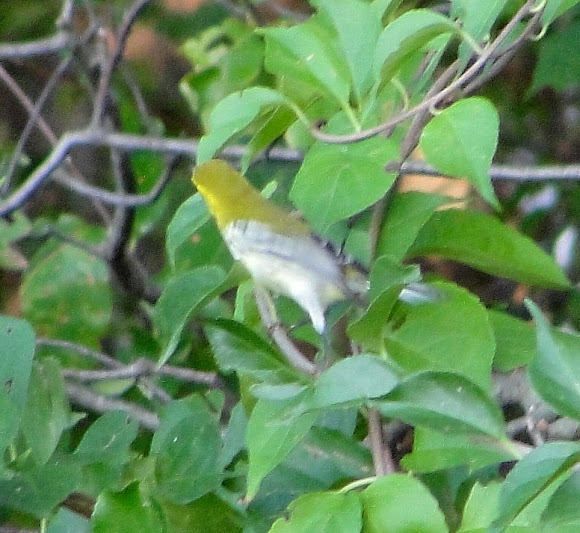 It is 12 cm long and weighs 9 g, and has an olive-green crown, a yellow face with olive markings, a thin pointed bill, white wing bars, an olive-green back and pale underparts with black streaks on the flanks. Adult males have a black throat and upper breast; females have a pale throat and black markings on their breast.

The breeding habitat of the Black-throated Green Warbler is coniferous and mixed forests in eastern North America and western Canada and cypress swamps on the southern Atlantic coast. These birds' nests are open cups, which are usually situated close to the trunk of a tree. Black-throated Green Warblers forage actively in vegetation, and they sometimes hover, or catch insects in flight.

Insects are the main constituents of these birds' diets, although berries will occasionally be consumed. This bird is vulnerable to nest parasitism by the Brown-headed Cowbird.

A black-throated green warbler perhaps? They have black throats (not visible here), a yellow faces, framed by an olive green crown, the wings are black/dark gray(?) with white stripes. Females and young species has less or almost no black on their throat.