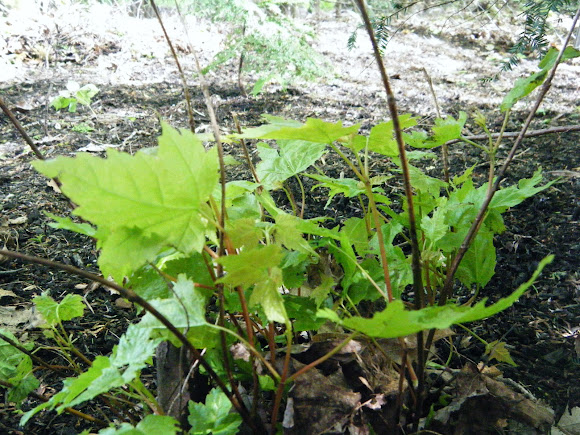 Most maples are trees growing to 10 – 45 m (30 – 145 ft) in height. Others are shrubs less than 10 metres tall with a number of small trunks originating at ground level. Most species are deciduous, but a few in southern Asia and the Mediterranean region are evergreen. Most are shade-tolerant when young and are often late-successional in ecology; many of the root systems are typically dense and fibrous. A few species, notably Acer cappadocicum, frequently produce root sprouts, which can develop into clonal colonies.[3]

Maples are variously classified in a family of their own, the Aceraceae, or together with the Hippocastanaceae included in the family Sapindaceae. Modern classifications, including the Angiosperm Phylogeny Group system, favour inclusion in Sapindaceae. The type species of the genus is Acer pseudoplatanus (Sycamore maple).[3] There are approximately 128 species, most of which are native to Asia,[4] with a number also appearing in Europe, northern Africa, and North America. Only one species, the poorly studied Acer laurinum, is native to the Southern Hemisphere.[5] Fifty-four species of maples meet the International Union for Conservation of Nature criteria for being under threat of extinction in their native habitat.[5] The word Acer derives from a Latin word meaning "sharp" (compare "acerbic"), referring to the characteristic points on maple leaves. It was first applied to the genus by the French botanist Joseph Pitton de Tournefort in 1700. The earliest known fossil maple is Acer alaskense, from the Latest Paleocene of Alaska.

I have some maple trees in my back yard.